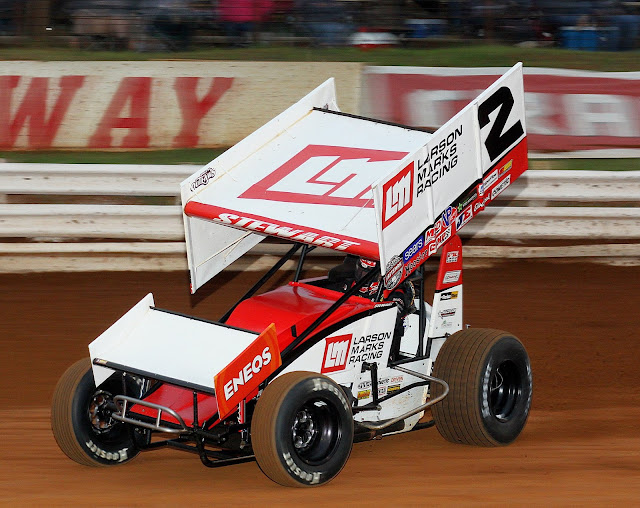 For the driver from Bixby, Okla., it was also his first series win of the season in the Larson Marks No. 2.

“If you would have told me my first win of this season was going to be at this racetrack, I wouldn’t have put all of Donald Trump’s money on that one,” said Stewart. “Track position was everything. This place gets really, really dirty and as I came up on the lapped traffic, I was more or less stuck.

Typically, you do see two grooves here, but tonight it just wasn’t there. The dash draw really helped put us out front. You don’t even know what it means to me to finally get to victory lane here. The East Coast isn’t always kind to me. I’m going to cherish this win for sure.”

Stewart and T.J. Stutts shared the front row for the 30-lap main event and nearly main contact as they raced down the frontstretch on the initial start. Stutts secured the lead in turns one and two. Stewart looked to the middle of the corners, but couldn’t pass the leader

He began to pull away with three laps completed. Third place Sheldon Haudenschild did a 360-spin in turn two. He kept racing and no caution flag was thrown.

Stewart began to close as they reached lapped traffic and blasted under Stutts as they raced into turn three and would slide in front of him. Stutts drove back under him and they were side-by-side down the frontstretch.

Stewart grabbed the lead on the double-file restart. Stutts tried to take it back, but couldn’t off turn two. Logan Schuchart passed Tim Shaffer for third and Lance Dewease was up to fifth following the restart.

“I didn’t get a good initial start to the feature,” said Stewart. “I told myself that if TJ picked the bottom that I actually thought the top was going to be a better starting spot. It worked out really good for us. Clean air makes a big difference. My guys have worked really hard this year. We haven’t had very good finishes. We’ve had some races that we should have won and I’ve either screwed up or we’ve had crazy stuff happen to us.”

Stewart picked the outside lane for the double-file restart and got a good one as he drove away from Stutts unchallenged. Daryn Pittman moved to fourth on the restart as Dewease lost some spots.
Stewart was in control as Shaffer got back by Schuchart on the restart and then pressured Stutts for second. Stewart had a 2.935 second lead when the caution flew with nine laps to go when Kraig Kinser stopped on the frontstretch.

Pittman blasted by two cars and into second on the restart and Shaffer drove by Stutts into third. Dewease was passing cars again with five laps remaining as he drove by Schuchart and into fourth.
Stewart controlled the final laps winning by 2.049 seconds over Pittman and Shaffer.

“I don’t think I’ve ever seen this place like this tonight,” said Pittman. “It was definitely different. Toward the end of the race it got more like normal Williams Grove. We had a good car on restarts and I could get by a couple guys each time. We’ve been working hard on this car. Shane was quite a bit faster than we were in clean air.”

“Tonight, we did the right things, put ourselves in position, and we’re on the frontstretch,” said Shaffer.

Dewease and Schuchart completed the top five and banged wheels on the backstretch following the checkers. Stutts, Ryan Taylor, David Gravel, Jason Johnson and Brad Sweet rounded out the top 10.
Johnson set quick time over the 37-car field with a lap of 16.402. Dewease, Sides, Schuchart and Shaffer followed Johnson in qualifying. Haudenschild, Stutts, Stewart, Taylor and Dale Blaney rounded out the top 10 in qualifying.