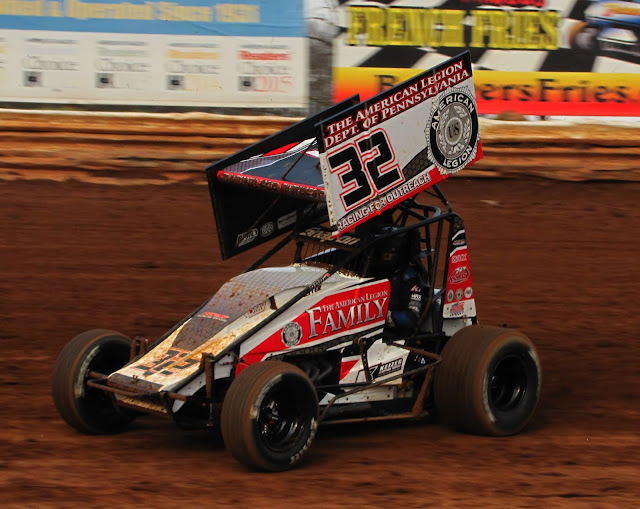 Aboard his American Legion Department of Pennsylvania No. 32, the Harrisburg, PA racer powered from his fourth starting spot into the lead on the first lap and never looked back in becoming the sixth different winner in seven events this season.

Foster held on through all 25 laps but a late race red flag with 19 laps complete put two-time winner Kenny Edkin on his bumper.

Paul Miller, Herr and Jake Miller were heat race winners for the 29-car field while Dodson took the consolation win.

Murphy started on the pole and led all 25 laps but had to keep Christine at bay during seven caution periods, including one with less than ten laps remaining in the event.

Sam Gallagher and Rodriquez were heat winners for the 20 late models.

Sites started 11th and took the lead from Matt Adams on the sixth lap and withstood many yellows before becoming the eighth different winner in as many street stock mains this season.

Heat winners for the 29 street stocks went to Mike Buckley, Ryan Smith and Potts with Jamey Huls winning the consolation.

Alex Updegraff picked up his seventh win of the season in the regularly scheduled Superior Homes Extreme Stock feature as he held back Patrick McClane for the win with Kyle Emig, John Frye and Tyler Knaub the top five.

McClane won the makeup 20-lap Extreme Stock feature that was lost to curfew on June 10th as he picked up his second season win over Updegraff, Emig, Knuab and Donnie Broderick.

There will be a Test N’ Tune on Wednesday night, June 28th from 6-9PM.