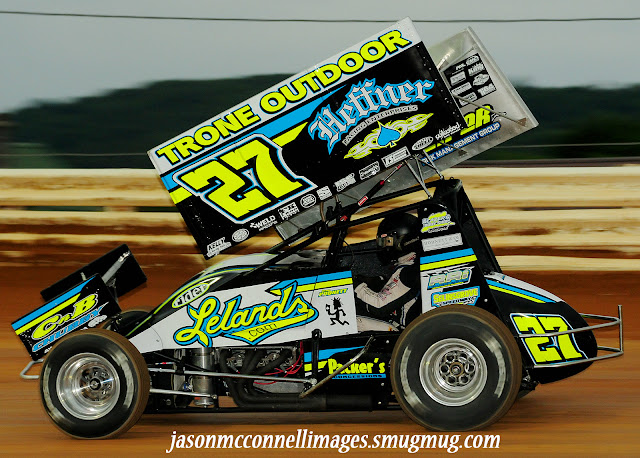 Port Royal – Greg Hodnett won his first Port Royal Speedway 410 sprint car main of the year on Saturday night, passing Aaron Ott for the lead and then outrunning Dylan Cisney to the finish for a $4,000 payday.

In the 305 sprint main, Drew Ritchey of Everett scored a popular win in the footsteps of his grandfather, Junior Ritchey, who made his mark on the speedway in the 1960s, notching 20 full-size sprint car wins during his tenure.

And in the econo late model main, a door to door finish found Eric Irvin edging out Derrick Garman for the victory.

Hodnett, who won a URC sprint feature at the track a few weeks ago, started fourth in the field and took third from Joey Hershey on the second lap.

Ott entered the backmarkers on the sixth tour and that’s when Hodnett was able to race around Wagner for second.

Ott had a decent lead over Hodnett until a brush with disaster in the second turn helped Hodnett close the gap when he clouted the outside wall but kept going.

This allowed Hodnett to close some distance but a caution flag unfurling with nine laps completed in the 25-lapper for debris was just what Hodnett needed.

The Spring Grove driver blasted by Ott on the restart as the pair raced into and through the first and second turns.

Cisney then got by Ott for second with 12 laps to go and threatened to run down Hodnett in traffic.

The front duo was pretty equally matched for speed as Cisney would close in for the lead on some laps and then Hodnett would again sneak away subsequently and the pair continued that trend all the way to the finish.

Meanwhile, Ott, Lucas Wolfe and Blane Heimbach waged war for third, fourth and fifth spots during the final half of the race, exchanging the positions repeatedly with Heimbach using the bottom groove while the others worked the topside.

Heimbach was as high as third at one point only to surrender to Ott late in the event as well as to Wolfe, placing him fifth at the finish.

Hodnett’s win was the 50th of his Port Royal career and third overall of the season, coming by 2.195 seconds over Cisney.

With a scant point lead over Doug Esh entering the event, Cisney gained some valuable points with his finish in the chase for the season title.

Heats went to Cisney, Wolfe and Hodnett. Wolfe set fast time with a lap of 16.727 seconds.

Polesitter Cale Reigle would lead the first seven laps of the 18-lap 305-sprint car main before Drew Ritchey would take over.

After starting eighth in the field, Ritchey was taking no prisoners in the non-stop affair, cruising as high around the speedway as he could possibly get while flirting with disaster aboard his No. 880.

On more than one occasion Ritchey slammed the outside walls and even rode the first turn rail at one point but kept going to get the win, sometimes passing two cars at a time to advance through the field.

Ritchey took the win in exciting style and was greeted by his veteran grandfather, Junior Ritchey in victory lane for a special family victory lane celebration.

Reigle ended up 1.861 seconds behind at the finish with Scott Ellerman in third followed by Tyler Reeser and Roger Irvine.

Jared Fulkroad led the first four circuits of the 18-lap econo late model main before polesitter Curt Dunn took over at the front.

Working through lapped traffic, Dunn collided with a slow car on the 14th lap and ended up crashing in the first corner, handing the lead over to Derrick Garman.

Garman started fourth in the field and raced into second on the eighth tour but found eighth starter Eric Irving knocking on the door over the final laps.

Irvin applied heavy pressure to the finish, drawing even with Garman as the pair raced off of the fourth turn for the checkers and edged Garman for the win by .305 seconds at the finish for the victory.

Garman was denied the win, instead getting second, followed by JR Toner, Andrew Shoop and Tim Fedder.