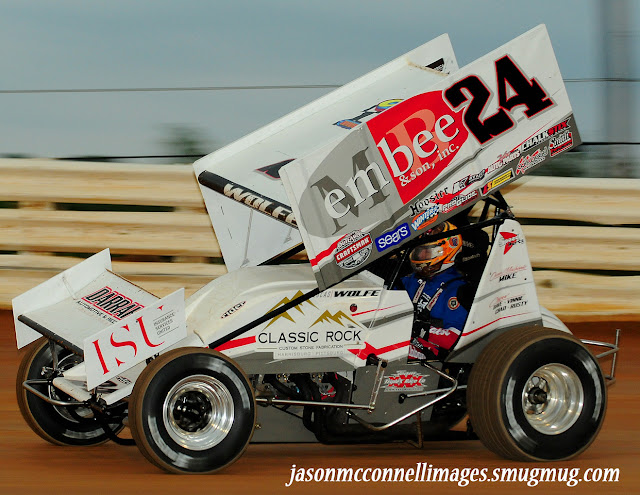 Selinsgrove Speedway fended off the rain while Lucas Wolfe of Mechanicsburg fended off Brock Zearfoss of Jonestown for the victory in Friday night’s 30-lap Ray Tilley Classic for 410 sprint cars.

It was Wolfe’s second win in a row at the track in 410 sprint car competition after having won the National Open last September, the last time the 410 sprints competed at the track.

The victory, Wolfe’s third career at Selinsgrove and fifth overall this season, was worth $4,088 plus the custom crystal trophy cup from the Tilley family.

TJ Stutts and Lucas Wolfe shared the front row for the start of the sprint car main event with Wolfe grabbing the lead down the backstretch. Fourth-place starter Brock Zearfoss raced underneath Stutts at the same time and began his pursuit of the leader.

By lap six, Wolfe began to encounter slower traffic as Zearfoss raced second, followed by Stutts, and third-place starter Danny Dietrich. At the halfway point, Zearfoss began to close in on Wolfe in a high-speed chase around the Superspeedway of Dirt Track Racing.

With eight laps to go, Zearfoss almost got within striking distance in traffic. The race’s first and only caution flag unfurled on lap 25 when fifth-place runner Jason Shultz blew a tire and parked his sprinter sideways in turns one and two.

When the race resumed, Wolfe maintained the front spot with Zeafoss in tow. The final two laps saw Dietrich power by Stutts for the third position. At the checkered flag, Wolfe was victorious by just two seconds over Zearfoss, Deitrch, Stutts, and Aaron Ott.

Polesitter Tim Fedder led the start of the econo late model main event. A close battle unfolded at the front of the pack between Fedder, Todd Snook, and Shaun Miller. On the second circuit, second-place starter Andrew Yoder reclaimed the position and set his sights on the leader.

On a lap five restart, Yoder took the lead from Fedder with an inside through turn two. Fedder later brought out the caution flag for a flat tire and rejoined the race. Yoder continued to set the pace and posted a mere 1.39 second margin of victory over Miller, Fedder, Devin Hart, and Jared Fulkroad.