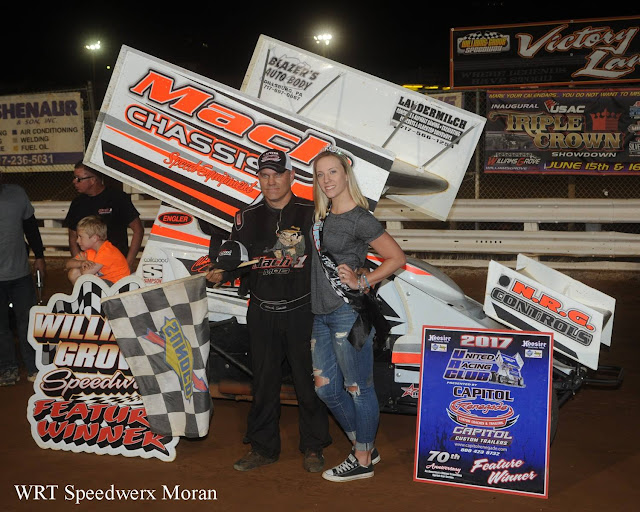 Mark Smith used lapped traffic during his lap 11 pass for the lead of Davie Franek and he never looked back. This was Smith’s second Capitol Renegade United Racing Club’s win of 2017 with his last win coming just a few weeks ago at Bedford Speedway.

With 31 cars signed into the pit area on Friday night, four heats were used to determine the starting lineup for the nights 25 lap feature event paying $2,000 to win. Heat race wins went to Eric Tomacek aboard the Central Builders Supply #1w, Ed Aikin aboard the Tan Racing Collectibles, Chip’s Auto Center #7, Curt Michael aboard the GEI Enterprises, Valley Forge Inc 5G and the Trone Outdoor, Leland’s.com #27 pioloted by Greg Hodnett. The consolation was won by the Kevin Nagy.

The front row of Davie Franek aboard the Dave Franek Auto Sales, Escape RV #28f and 9 Time URC Champion Curt Michael leading the field of 24 cars to the green flag. It was the #28f of Franek who jumped out to the early lead followed by Michael, and Smith. Just under 10 laps in, and the 28f of Franek already into lapped traffic. Smith was pressuring Michael for 2nd and mid pack starter Greg Hodnett who started 12 was already up 6th place, Smith saw his opening and took it passing Michael for second and then Franek for the lead just 1 lap later.

Once Smith was in the lead, he would easily pull away from 2nd place Franek and the rest of the field. A lap 20 caution for the stopped car of Keith Prutzman saw Franek pull up to the back bumper of Smith. The double file restart saw Smith once again take the lead but the red was out just 1 lap later with the 747 of Davey Sammons going over on turns 1-2. On the restart, it was Smith again, but the caution was displayed once more with contact between Robbie Stillwaggon and Mike Walter saw Walter into the turn 4 guardrail and Stillwaggon stopped on the front stretch. Under the caution the 8th place runner of the #67w of Justin Whittall also stopped on the front stretch. Whittall thought he saw the red lights displayed and with Stillwaggon out of his car on the front stretch, Whittall put the brakes on and turned the car off. Whittall was having a great run up until that point running in the 8th position.

On the restart, it was Smith once again, followed by Franek and now Greg Hodnett had raced his way into the picture and was pressuring Franek for 2nd. Smith lead the final 13 laps en route to his 2nd URC win of 2017. Smith has been dominating lately in the 360 ranks as he also picked up a win at the Selinsgrove Speedway a week ago.

URC Tidbits: JJ Grasso was making his first URC appearance in a few years racing for Kenny Eldreth aboard the Eldreth Construction #25. Grasso plans to compete on Saturday night when the United Racing Club visits the Selinsgrove Speedway. Derek Locke put in another good performance racing his way from 14th to 8th in the feature event. David Quackenbush raced at Williams Grove for the first time advancing to the feature event through his heat race. Chuck Hebing was with the URC again electing to skip multiple race closer to his update NY home. Ed Aikin picked up his first heat race win of 2017 and just when he thought his luck was turning, Aikin picked the 9th pill at the pill draw. Stillwaggon returned for racing down south (Mississippi) and had out a brand new GF1 chassis.