Smith on a Roll with the Capitol Renegade United Racing Club 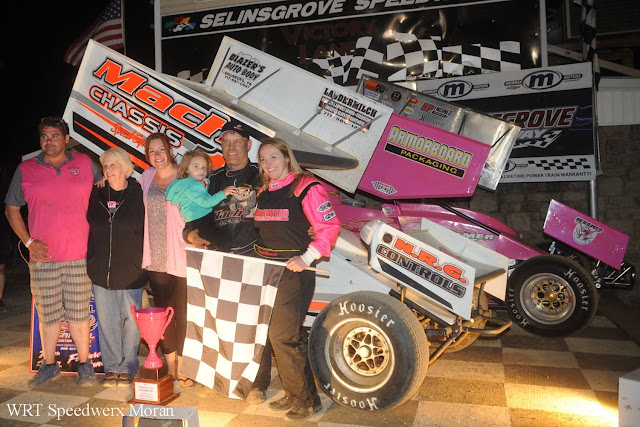 Mark Smith and his Mach 1 chassis #M1 found its way back in victory lane for the second time this weekend. Smith who also won on Friday night at the Williams Grove Speedway backed up that performance with his second win of the weekend and third of the 2017 Capitol Renegade United Racing Club season.

With 30 cars signed into the pit area, three heat races and a B-Main were used to determine the A-Feature line up. Heat race wins went to the Franek Auto Sales #28f of Davie Franek, Nate Snyder who was looking to back up his win last Saturday night with another for the Kramer Cup and the Shearer’s Sales and Service #63 of Josh Weller. The B-Main was won by the #29 of Jason Shultz.

The M1 of Mark Smith and the driver of the Dellinger’s Auto Body #77 of Derek Lock brought the 26-car field to the green flag. The oriental start was called back due to Greg Hodnett jumping to the outside and jumping the start from his 4th starting position. Hodnett was sent back a row and started the feature in the 6th position. As a result, the #63 of Josh Weller moved up a row and started the feature in the 4th position. On the restart, the M1 of Smith jumped out to the lead and was into lapped traffic by lap 4. A lap 4 red flag was show due to an incident in turn 4 involving the #73b of Brett Michalski and the #56 of Nate Snyder. Snyder got the worst end of the wreck ending up going over multiple times. Michalski was running in the top 10 when the incident happened and headed to the pits for repairs. Michalski returned to action before the field went back to green.

The caution flag was again shown on lap 6 due to a flat left rear of the #76 of Larry Kelleher, also during the same time Michael Walter was stopped on the front stretch and the #73b of Michalski was stopped at the pit out with a broken front end. Michalski and Walter were done for the night. Kelleher’s tire was changed and sent back out before the green waved gain.

On the restart, Smith again jumped out to the early lead and was into lapped traffic by lap 13. On lap 15, the caution was again shown this time for the 1w of Eric Tomacek who’s right rear exploded coming out of turn 4. The field was brought to a stop for a red flag so the crews could tend to their cars with fuel and air pressure. On the restart Smith again jumped out to the lead, followed by Davie Franek, Greg Hodnett and Derek Locke. Smith would lead the remaining laps en route to his 3rd URC win of the 2017 season. Smith was followed to the line by Davie Franek, Greg Hodnett, Derek Locke and Jason Shultz who came from 18th for a top 5 finish.

URC Tidbits: Derek Locke continues to impress with a 4th place finish tonight. Jason Shultz advanced 13 positions in the feature event advancing from 18th to 5th. Kris Lilick and Jim Shuster both took provisionals. Good to see Ryan Higgins back after motor issues at Port Royal sent him home of Sunday night. JJ Grasso’s return to URC didn’t go as planned as Grasso experience motor issues during the night. Good run by Troy Betts who advanced from 22nd to 13th during the 30-lap feature event. The weekend double event had 31 and 30 cars in the pits each night.