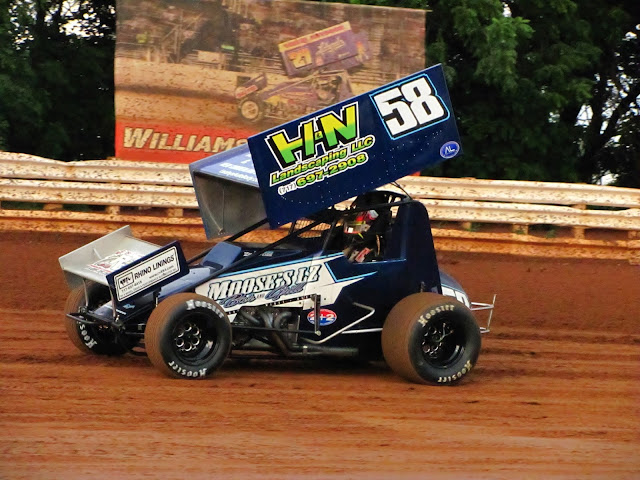 MECHANICSBURG, Pa. – When Brock Zearfoss first drove Aaron Long’s No. 58, he didn’t qualify for the World of Outlaws race at Williams Grove Speedway in May.

But, it was a much different outcome Friday night as Zearfoss steered the car to victory in a wild 25-lap main event.

His first career series victory was worth $8,000 as he held off some of the Outlaws best.

“I was either going out of the park or winning this,” said Zearfoss in victory lane. “Our car was really good all night long. They’ve been working so hard. We debuted this at the first Outlaw race and weren’t good at all. To go from not making the show to standing on the frontstretch at an Outlaw race says something about these guys. I wasn’t lifting. I probably should have because I was banging off that cushion pretty hard, but how many times do you get to win an Outlaw race? This is a dream come true.”

“Our notebook isn’t very big,” said Long. “People can say what they want, but I think this guy is the most under-rated driver in the state. He gets better every week.”

Daryn Pittman and Lance Dewease swapped the lead in turns one and two on the initial start. Pittman officially led the first lap, but it was Dewease getting by for the lead off turn two.
Zearfoss, of Jonestown, passed Donny Schatz for the third spot as they raced off turn four. Zearfoss nearly passed Pittman for second as well. Dewease had a two-second lead when he reached the back of the field with eight laps completed.

Pittman caught the fence coming off turn four and Zearfoss got by. David Gravel passed Schatz and then Pittman to move into third.

The red flag flew with 16 laps completed. Sheldon Haudenschild flipped in turn one. He was okay. Danny Dietrich was also involved. Dewease had a 2.194 second lead.

Gravel passed Zearfoss down the frontstretch and then threw a huge slider at Dewease in turn one on the restart. Dewease was at the cushion as Gravel slid across the corner. Dewease jumped the cushion resulting in the car flipping several times along the top of turn two. A video replay showed no contact was made between the two cars. Dewease climbed out and walked away from the Donnie Kreitz-owned car.

Zearfoss and Gravel led the field down for the double-file restart with 16 laps completed.
Race officials called a jump start on Gravel on the restart.

“This motor was stumbling all night,” said Zearfoss. “I got it to go a couple of times. David didn’t jump me. It just didn’t go. I got lucky there.”

This put Gravel back one row and Schatz up to second. Zearfoss held Schatz back on the restart.
“I got it to go on that restart, but I didn’t want to see another caution because I wasn’t sure if I’d be able to do it again,” said Zearfoss. “Luckily, I got a good restart and was able to hold him off.”
Gravel got back by Pittman and then went after Schatz. They traded sliders and raced side-by-side before Gravel secured the spot off turn four just as the caution flew with 19 laps completed.
Gravel threw a slider at Zearfoss in turn one on the restart, but couldn’t clear the pass as Zearfoss blasted off the cushion.

Schatz got back by Gravel in turn four, but Gravel returned the pass in turn two as Zearfoss motored away.

His final margin of victory was 1.384 seconds over Gravel.

“I never touched him,” said Gravel referring to Dewease. “Lance probably had a pretty tight racecar and flipped over on the curb. I honestly didn’t want to slide him. I checked-up. I thought he was going to get back around me. I had to work really hard to get back to second. I feel like we had the best car, but finished second.”

The $20,000 to win Summer Nationals finale will be held Saturday night featuring the World of Outlaws Craftsman Sprint Car Series.