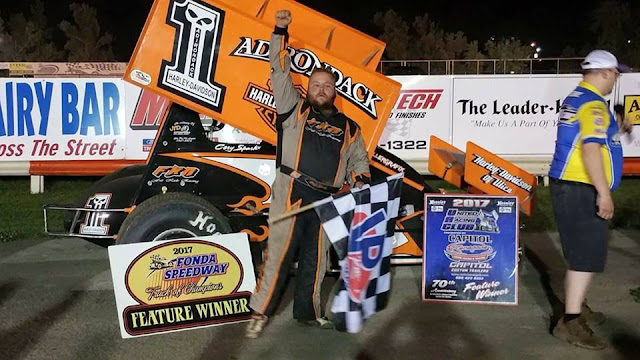 The 25-lap URC 360-sprint car feature began with URC regular Curt Michael the early leader. Local favorite Cory Sparks started the event in the third position, fell back early, but by lap eight was back in the third position after getting by Bobby Varin for the spot. On lap 11, Sparks was the new second place car after getting by Matt tanner for the position with Michael a half straightaway ahead.

On lap 13, Sparks cut into Michael’s lead by a full second and on lap 14 on the backstretch Sparks went around the outside of Michael for the race lead. Sparks led the remaining laps in the Adirondack Harley Davidson #1HD for his first win at Fonda under the URC sanction and was followed in the top five by Michael, Danny Varin, Tanner, and Bobby Varin.

Sparks is also a two time winner at Fonda in the CRSA 305 sprint car.

“The first sprint car race of my career was a URC event here at Fonda in 2005,” Sparks said in victory lane. “But this is my first win of my career with URC.”