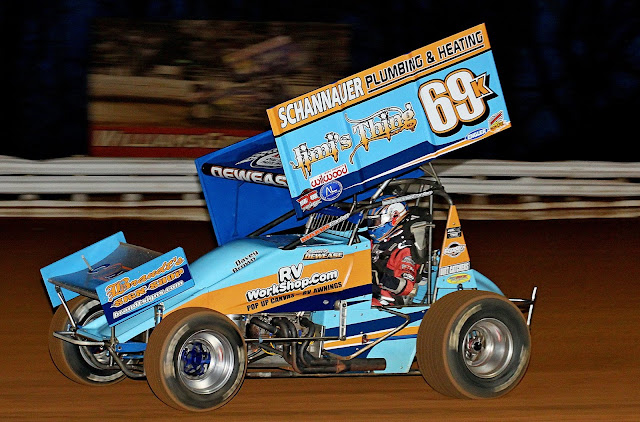 In the 25-lap Dave Kepner Tribute for econo late models, Eric Irvin proved victorious over a banner field of econos.

And in the xtreme stocks Bill Powell won his third race of the year.

Polesitter Anthony Fiore led the first lap of the 25-lap sprint car main before second starter Tyler Walker took over on the second tour with Kody Lehman in third and Dewease already up to fourth after a mile of racing.

Dewease motored into third with five away while Lehman too advanced to be up to second.

Lehman caught Walker for the lead on the sixth tour and took a stab at control only to see Walker’s momentum carry him back into the lead as Dewease took advantage and then relegated Lehman to third.

And then in the blink of an eye Dewease threw his No. 69K to the inside of Walker in the first and second turns to simply jet away with the lead on the backstretch.

The pace was slowed after the seventh lap was completed when Steve Buckwalter stopped on the frontchute and Dewease was back up to speed on the restart, motoring out to a 5.4 second lead by the halfway point.

Another restart just after halfway found Greg Hodnett up to second with a clear shot at Dewease but to no avail.

Dewease pulled away over the ensuing laps and had a 1.9 second lead with 10 laps to go.

With five laps to go Dewease was again into the backmarkers, with a 2.3 second lead but during those final laps the leader would start “hanging” in the corners, allowing Hodnett to dramatically slice into his advantage.

Hodnett would indeed run down Dewease for the win but time ran out with Dewease taking his fourth win of the year at the track and 104th of his career by .537 seconds at the finish.

Lucas Wolfe got around Dylan Cisney for third in the final two laps with Cisney ending up fourth and a passing clinic by Blane Heimbach placing him fifth at the finish.

Heats went to Fiore, Buckwalter and Zearfoss with Heimbach taking the consolation race.

Stuhler started on the pole of the 22-lap super late model main and wired the field for the victory that surprisingly was just the second of the veteran’s career.

Matt Parks chased Stuhler early and by the time that Stuhler entered lapped traffic on the eighth tour he had amassed a 4.11 second lead.

A caution flag bunched the field with 12 laps to go, finding Andy Haus up to second after starting sixth in the field.

Stuhler pulled away on the restart as he did no another with four laps to go but a final restart with two laps to go found Haus sticking with the leader and getting his nose to Stuhlers inside as the pair headed to the white flag.

But Stuhler proved too stout for Haus, taking the win by 1.306 seconds with Tim Smith Jr. finishing third followed by Mike Lupfer and Rance Garlock.

JR Toner started on the pole of the 25-lap Kepner Tribute for econo late models and led the way over Dillan Stake for numerous laps with Stake chasing him into traffic with 13 laps to go.

Irvin started ninth in the main and methodically worked his way through the front-runners, racing into second on the 17th tour.

Using the top groove, Irvin quickly ran down the leader and marched into control with four laps to go.

Bill Powell took the lead from Kevin Imes on the sixth tour before speeding to the checkers, his third of the year at the oval.

Imes chased Powell all the way to the finish with Jason Zook crossing the line third followed by Pete Leister and Keith Strummel.