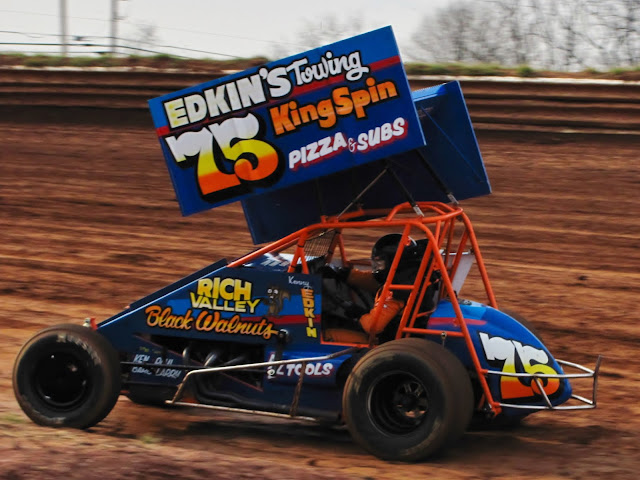 Edkin’s win was his division-leading third of the season, backing up his first career win back in April and last month’s Bud Bricker Nationals win.

The Marysville driver dominated the Firecracker 40, winning the dash to earn the pole starting spot and racing off from the field throughout the distance.

Despite a red flag on lap 22, Edkin went unchallenged to the win, taking the checkered flag 5.534 seconds ahead of runner-up Steve Fannasy.

The win was worth $2,000 to Edkin and also strengthened his track point lead aboard his Edkins Towing, Marysville Motorcars, Carlisle Auto Salvage, King Spin Pizza, Rich Valley Black Walnuts No. 75.

Gregg Foster paced the 30-car field in time trials with a lap of 17.506 while heats were won by Gutshall, Beidel and Edkin. Chris Meleason was the Consolation and Edkin was the Dash winner.

Dover’s JR Rodriguez took the lead from Cameron Benyou on lap six and drove to his first win of the year in the 25-lap Bernheisel Race Cars 358 Late Model feature.

Rodriguez pulled away from the field about his Superior Homes No. 97 to become the sixth different late model winner this season. He took the win over  Sean Merkel, Benyou, Sam Rial and last week’s winner Matt Murphy.

Heats for the 13 car field went to Benyou and Rodriguez.

Mike Potts and Smith were heat winners for the 19 street stocks.

There will be a Test N’ Tune at the speedway on Wednesday, July 5 from 6-9PM.