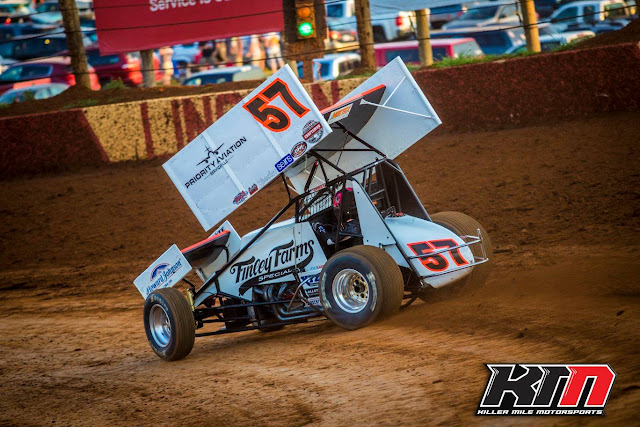 BECHTELSVILLE, PA (July 4, 2017) -- On a Fourth of July celebration of speed, Kyle  Larson wowed a jam-packed NAPA Auto Parts Thunder on the Hill Racing Series crowd and claimed his third straight Pennsylvania 410 Sprint Car Speedweek victory, while Duane Howard scored the win in the NASCAR Modified 30-lap event at the Grandview Speedway on Tuesday Night in an event presented by Pioneer Pole Buildings  at the Grandview Speedway.

Larson may have taken the checkered flag, but the region’s top Sprint Car aces – dubbed the Pennsylvania Posse – didn’t take it easy on the current NASCAR Cup Series Point Leader.

“I felt like I was playing defense all night, tonight,” Larson said in Victory Lane.  “Ryan Smith had a great car.  I definitely got a little lucky.”

Ryan Taylor and Greg Hodnett led the field to the drop of the fireworks filled 410 Sprint Car A-Main.  On the initial start, Larson – who started in the third position – shot inside Taylor in a three-wide battle for the lead.  Hodnett and Larson engaged in an expert duel for the top spot, until contact between the two sent Hodnett’s No. 27 machine spinning towards the outside guardrail.

Larson set a rapid pace on the restart, with TJ Stutts challenging for the lead.  A lap 8 caution stacked the field, and a three-wide battle for the second spot ensued with Stutts holding off Taylor and Rico Abreu.  It would be Abreu and Stutts with the short straw after contact between the two left both cars spinning.

Maintaining the lead through consecutive yellows, Larson pulled away from the pack at Lap 11 with Taylor battling Ryan Smith for second place.  The red flag flew for the first time on the 12th circuit when, three-time Thunder on the Hill winner, Tyler Walker got upside down in spectacular fashion, collecting Brandon Rahmer in the process.

A full-house of race fans leaped to their feet when Smith muscled around Larson exiting turn 2, carrying that momentum into turn 3 before clipping the wall, sending The Warko Group No. 94 of Smith flipping wildly into the third turn.  A dejected – but unscathed -- Smith exited the car to a standing ovation from race fans.

Inaugural Thunder Cup winner, Danny Dietrich would restart in the second position – but Larson was too quick for ‘Double D’.  Aside from the leader, Dietrich had his hands full with third-place runner Freddie Rahmer who maneuvered his way into the second spot with five laps remaining.

Oley, PA’s Duane Howard claimed his second consecutive NAPA Auto Parts Thunder on the Hill Racing Series win steering the Norm’s Save Station No. 357 machine.  Howard – who started in the fourth position – powered around the outside of Craig VonDohren on the 15th lap and went unchallenged throughout the remainder of the 30-lap NASCAR 358 Modified feature event.

NAPA Auto Parts continues their long run with the Thunder on the Hill Racing Series as the title sponsor joined by Pioneer Pole Buildings, Levan Machine and Truck Equipment  and GALCO Business Communications.

Notes:
25 410 Sprint Cars and 43 Modifieds were signed in for Thunder on the Hill Action

NASCAR drivers Kyle Larson and Kasey Kahne greeted fans and signed autographs throughout the evening while competing in the 410 Sprint Car division.