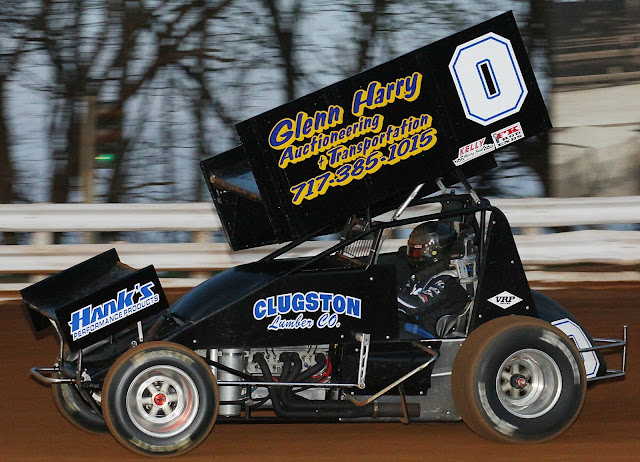 Port Royal – Rick Lafferty dominated the Port Royal Speedway Living Legends Dream Race for 410 sprint cars on Saturday night to record the biggest win of his career, worth a combined total of $12,510 including posted payout and lap moneys.

Lafferty not only won the 35-lap Dream A Main but he also scored a $2,000 win in a 16-lap semi feature to set himself up for the main event. Danny Dietrich won the other semi feature contested.

In the 25-lap super late model main, it was Coleby Frye taking his first Port Royal checkers of the year, worth $2,000.

Lafferty started second in the Dream Race main event and outraced polesitter Greg Hodnett through the first corner to take the lead.

The first caution flag of the race unfurled on just the second lap, bunching the field, with Dietrich restarting third and Lance Dewease racing fourth.

Lafferty entered the backmarkers with Hodnett and Dewease giving chase on the 10th lap and that’s when Hodnett got another shot at the lead.

It was on the 13th tour that Hodnett squeezed by Lafferty for the lead as the pair entered the first turn but Lafferty proved up to the challenge and pulled back around Hodnett onto the backstretch to reclaim command.

A lap later Dietrich slowed on the track, forcing another caution flag.

Lafferty was stout on restarts the entire night, in both his semi main and the feature event, pacing the field slowly to the stripe before dropping the hammer and jetting away when the green appeared.

Another caution flag with 17 away proved the same result and Lafferty again entered traffic with 10 laps to go.

Lafferty again drove away on the restart to take the victory, the 11th of his career at Port Royal, with a margin of victory of 1.136 seconds.

Dewease raced with Hodnett for second on the final lap and secured the spot in the final turns, taking home some $6,090 on the night including lap and purse moneys.

Hodnett ended up third in the A, taking home a combined total of $3,510.

Lucas Wolfe finished third, pocketing a combined $2,860 and Dale Blaney rode home fifth, accumulating a total of $2,200 on the night.

Kody Lehman won a complete set of Penske Shocks for having entered the most 2017 Port Royal events out of all the non-qualifiers at the conclusion of the B Main.

Chad Hollenbeck started second and led the first 13 laps of the 25-lap super late model main before seventh starter Coleby Frye took over to run to the win over a stout 32-car field.

Frye worked into third on the 11th lap, getting around Jason Covert for the spot before driving by Matt Cosner for second on lap 13.

It then took Frye just one more circuit to work by Hollenbeck for the victory.

Jason Covert came to second, getting by Cosner for the spot on the 17th loop but failed to gain on Frye for the win.

It will also be free military night, when past or present members of the military, with proper id, receive free general admission.