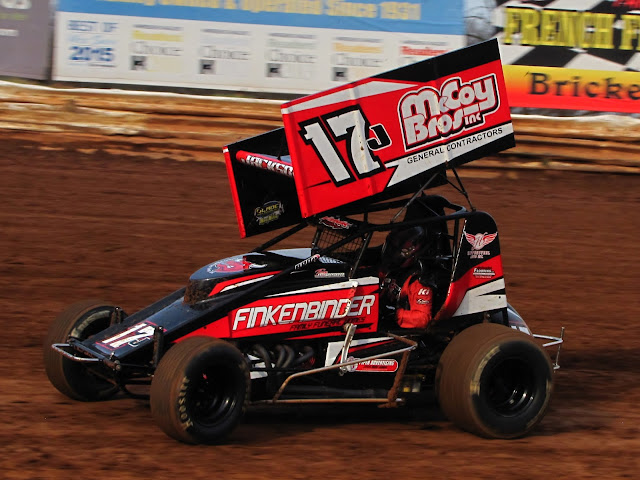 Saturday night, the Newville, PA racer put it all together to capture his first 25-lap Credit Connection Auto Sales Super Sportsman feature win of the season.

After crashing last week and spending long hours all week in the race shop, Jackson started sixth on the grid, exchanged the lead with veteran Rich Eichelberger several times during the early laps of the feature. Jackson took control with five laps down but two late race yellows bunched the field on Jackson’s bumper.


Following a lap 23 caution, Doug Dodson was applying pressure to Jackson and as the pair raced towards the white flag, sparks flew from Dodson’s machine ending his bid as Jackson held on during the final lap to become the seventh different Super Sportsman winner this season aboard the McCoy Brothers General Construction, Liberator Performance No. 17J.

Eichelberger, Gutshall and Justin Foster were heat winners for the 23 car field.

Adam Pierson started on the pole of the 20-lap ARDC Midget feature but would follow Brett Arndt during the first five laps before taking the lead and driving to his first Susquehanna win.

Kunsman and Arndt were ARDC heat winners with 17 cars pitside.

Joey Hoffer raced to his second win of the season in the 20-lap Morgan Paving/Aqua Fun Pools Street Stock feature.

Potts, Sigler and Hoffer won heats for the 23 street stocks.

In the regularly scheduled Extreme Stock feature, Donnie Murphy ended the Updegraff domination coming through with his first win of the season and only the third different Extreme Stock winner.

Murphy was the eighth and final leader in the 20 lap event as Travis Horan, Jed Latshaw and Patrick McClane were all scored leaders of at least one lap during the main.

Murphy took the lead on lap 15 and held back 15th starter Updegraff for the win with Kyle Emig, Jed Latshaw and Michael Smith the top five finishers.

There were 20 Extreme Stocks in competition.


Coming up Saturday night August 5th, it will be Tyson Fence Night at Susquehanna Speedway and it will also serve as Kids Night 2017 with lots of festivities and prizes for the youngsters on hand. The Credit Connection Auto Sales Super Sportsman, Bernheisel Race Cars 358 Late Models and Morgan Paving/Aqua Fun Pools Street Stocks will make up the three division program,. A makeup feature for the 358 Late Models, that was rained out on July 8 will also be on the race card which begins at 7PM with racing. Kids Night activities begin at 3PM.