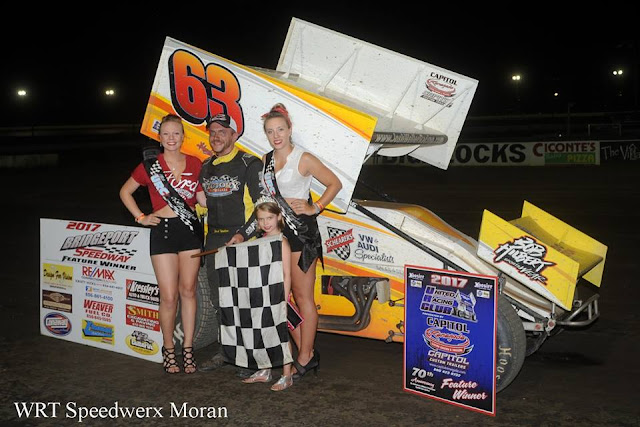 Josh Weller and the and the Schearers VW & Audi Specialists #63 team shook the monkey off of their back on Tuesday night picking up their first win of 2017 and their first win on the Capitol Renegade United Racing Club 2017 tour.

With 20 cars signed into the pit area, two heat races were used to determine the feature line up. Heat race 1 saw the initial start slowed by the caution flag as the 24 of Mike Haggenbottom was left sitting just past the start finish line with a broken front axle. Once racing resumed, the 747 of Davey Sammons took control of the lead with the 15 of Mark Bitner close behind. Bitner finally made his move with time running out on the 8-lap heat race and the two traded positions with Bitner taking the checkered flag and the heat race win. Bitner was followed to the line by the 747 of Sammons, the 63 of Josh Weller, 5w of 410 regular Lucas Wolfe and 56 of Chris Coyle rounding out the top 5.

Heat race 2 saw the 89 of Robbie Stillwaggon hunt down the 67w of Justin Whittall in what resulted in a wheel to wheel battle for first place. Stillwaggon overtook Whittall using the highline and headed to the heat race 2 victory. Stillwaggon was followed to the line by Whittall, 5g of Curt Michael, 28f of current URC Points Leader and defending champion Davie Franek and Adam Carberry in the 47 rounding out the top 5.

Heat race 1 winner Mark Bitner drew the pole and the 747 of Davey Sammons drew the outside pole for the 25-lap feature event. On the start, the 15 of Bitner rocketed to the lead followed by the 747 of Sammons and Josh Weller in the 63. The first caution was displayed on lap 6 as the 21c of Cody Jourdan spun going into turn 1 and had to be pushed back to the pits. Jourdan would not return. On the restart, it was Bitner once again, but this time Weller over took 2nd place from Sammons and Davie Franek was now into the mix from his 7th starting position.

Weller needed to just 5 laps before blasting by Bitner for the lead, and Davie Franek followed suit passing the 15 of Bitner just 1 lap later. With just over halfway, it was all Weller and Franek. By lap 13 nine out of the top ten were running the high side of the racetrack except for the 5w of Lucas Wolfe.

By lap 17, the bottom was starting to come back in and the drivers were searching for the best line to race. Franek continued to pressure Weller for the lead and when Weller had to go to the high side to pass a lapped car, Franek tried the bottom. The two were even coming off turn 2, but Franek had to let off to avoid the lapped car. Franek was back in hot pursuit and by lap 22, was back to striking distance of Weller. As the two entered the backstretch on lap 23, Franek appeared to slow and Weller gapped the 28f machine.

A lap 23 caution for the 67w of Justin Whittall brought the field back to Weller’s bumper. During the caution, the 5w of Lucas Wolfe headed pit side with a flat left rear. On the single file restart, it was all Weller as he cruised to his first win of 2017. Josh Weller now becomes the first repeat winner of the Bridgeport Speedway annual 3 for All event. Followed to the line was Franek, the 747 of Davey Sammons who made a great outside move on the lap 23 restart and overtook Bitner who finished in the 4th position and rounding out the top 5 was Chris Coyle with a fantastic run in the Fred Kennedy owned machine.

URC Tidbits: Justin Whittall debuted a new red white and blue machine sponsored by Atlantic Utility Trailers Inc. Adam Carberry is beginning to show signs of his 2016 self with another good run. Chris Coyle came from 9th to finish 5th in the 25 lap feature. Coyle was running as high as 4th late in the race. Franek continued to strengthen his 2017 points lead with a 2nd place finish.