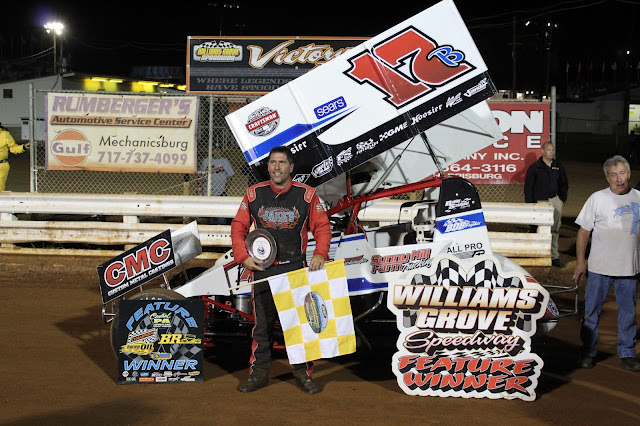 Buckwalter started second in the field to lead every lap of the 25-circuit main event for the 410 sprint cars.

His pace was slowed only once, on the fifth lap when the red flag appeared for a fire on the machine of Eric Tomecek.

For the restart, Kody Lehman chased Buckwalter but fifth starter Cory Haas moved into the second spot on the 13th tour just as the leader entered the backmarkers.

Although Zearfoss took his shots at Haas, it was Haas who tried to spoil Buckwalter’s party late in the race.

Haas steadily drove down Buckwalter’s advantage, shaving a full second off of his lead from lap 17 to lap 20.

However during the final circuits, Buckwalter was again able to stretch out his advantage to 1.277 seconds at the finish.

Haas shot low across the third and fourth turns repeatedly during the late going trying to stick with Buckwalter but instead rode home second.

The victory was the eighth of Buckwalter’s career at Williams Grove Speedway.

Zearfoss crossed the line in third followed by Lucas Wolfe and Freddie Rahmer. 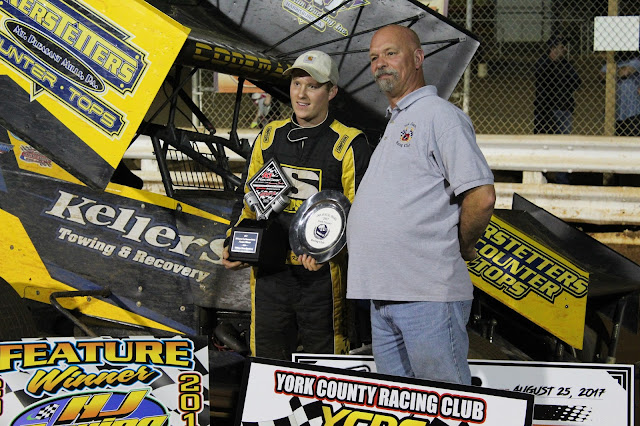 Keller of Selinsgrove ran the ragged edge and sometimes over it to pick up his first career 358-sprint victory at the speedway.

After starting second in the field, Keller would lead all 25 laps of the K1 RaceGear Summer Series main event to take home a $1,500 payday.

However the Snyder County pilot nearly gave the win away on several occasions when he jumped the cushion at both ends of the speedway.

The initial lap of the 358 sprint main was halted for an eight-car melee in the third turn that saw at least two cars flip.

No injuries were reported however.

Keller entered the backmarkers on the ninth tour of the event, chased by Brett Wanner and Phil Walter.

However one-time 2017 winner Kevin Nouse was on the move through the top-five and eventually worked his way into second with a pair of laps to go.

And by that time, Keller was losing ground and hopping the cushion repeatedly, creating a closer finish at the end than perhaps would have developed otherwise.