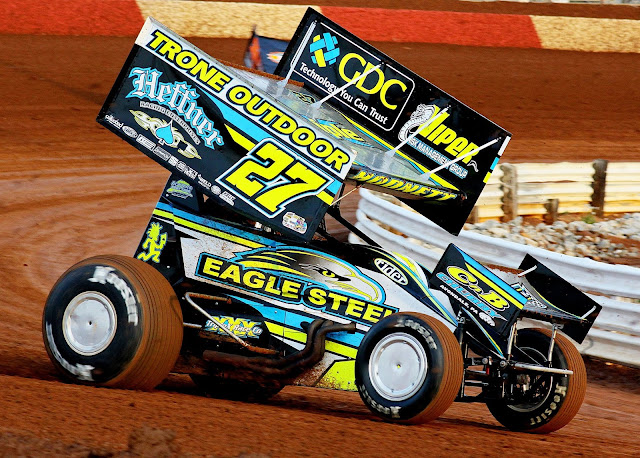 YORK HAVEN, PA…8/20/17
It had the makings of the last time the BAPS Coatings and Supplies 410 Sprint Series competed at Susquehanna Speedway when Greg Hodnett led all but the lap that counted.

Hodnett made sure that wasn’t the case in Sunday night’s Arctic Cat All Star Circuit of Champions Justin Snyder Salute to the Troops event as he dominated all 30 laps of the A-Main to close out the four-race All Star swing through Central Pennsylvania.

Hodnett’s win also gave the PA Posse four straight weekend wins over the All Stars but the win was the Spring Grove drivers first All Star triumph since June 2015.

Hodnett won the first Dash that put him on the pole for the $5,000 to win event but a quick caution for a multi car pileup on the second lap slowed the pace.

When the green replaced the yellow, Hodnett immediately pulled away from the field as fourth starting Lucas Wolfe moved into the runner-up spot.

Wolfe stayed within striking distance of Hodnett who worked his way through heavy lapped traffic starting on lap eight as the race stayed green until the 25th lap when officials thought Tyler Esh was going to stop and threw the yellow flag.

The yellow wiped out a near six-second advantage Hodnett had over the field and put Wolfe on his bumper for the restart.

Like the July race, Wolfe chased Hodnett until the final lap when he stole the win but Hodnett wasn’t able to let that happen this time as he pulled away from Wolfe over the final five circuits to become the first repeat winner in BAPS 410 Sprint action this season at Susquehanna.

Hodnett’s win in the Mike Heffner owned #27 was his fifth of the year in Central PA and came over Wolfe by nearly two seconds.

Ryan Smith paced the 36-car All Star field in time trials with a lap of 15.317 seconds to earn the $500 bonus from Emory Transmissions.

All Star heat races were won by Dewease, Zearfoss, Macri and Hodnett while Hodnett and Macri were the two Dash winners. Sammy Swindell won the B-Main.

Trey Starks picked up the $500 bonus from Brown and Miller Race Solutions for the Hard Charger. Starks started 23rd and finished 14th.

Like Hodnett, Nick Sweigart wired the field to post the win in the 20-lap Freedmont® Mortgage PASS/IMCA 305 Sprint car feature.

The next BAPS 410 Sprint Series event will be on Thursday night, September 21 when the 410 Sprints will be joined by the Central PA Legends. Race time will be 7PM.