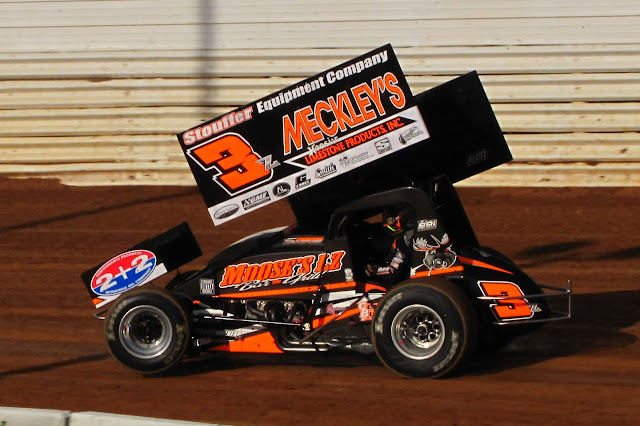 Port Royal – In track record time, Brock Zearfoss of Jonestown completed a sweep of the month of August at Port Royal Speedway on Saturday night by claiming his third 410 sprint car main in a row.

Zearfoss started eighth in the field to record the $3,200 payday and set himself up to launch into the most lucrative week of the season at the track as the Juniata County Fair Races loom.

Derrick Garman took the win in the 18-lap econo late model main and Jeff Miller scored the 305 sprint feature to close out the night.

Polesitter Jared Esh blasted into the lead at the start of what would be the non-stop, 25-lap 410 sprint car feature, chased by Daryl Stimeling and fifth starter Blane Heimbach.

Esh was blistering the track early in the Ehrenzeller No. 33 and was way ahead of Heimbach when the Selinsgrove pilot drove into second on the second tour.

It took until lap four for Zearfoss to blast into third and begin racing for the top spots.

With a 2.819 second lead, Esh of Lancaster entered the backmarkers on the eighth tour as he circled the outside of the speedway with Heimbach and Zearfoss in pursuit.

By lap 11, Heimbach had cut Esh’s lead down to 1.156 seconds as both he and Zearfoss battled for the second spot.

With 10 laps to go, Esh’s advantage had all but evaporated, now down to .48 seconds amid traffic and a lap later, Zearfoss pulled the trigger on Heimbach for second with a move in the third and fourth turns.

It took Zearfoss just two more laps to run down Esh and bolt into the lead before driving away and Heimbach then took the second spot with five laps to go.

Indeed the front trio was fleet in command of the field with three-quarters of a lap separating the third place car of Esh from the fourth place machine of Daryl Stimeling during the final circuits.

Zearfoss’ margin of victory over Heimbach was 1.069 seconds, followed by a career best third place finish for Esh.

Heats went to Sheaffer and Zearfoss.

Second starter Austin Berry of Nook took the lead at the beginning of the super late model main with Chris Casner giving chase while Andy Haus started sixth in the field.

Devin Friese, who started fourth, motored into second with four laps away but Haus was close behind.

Haus made his move of the race on the 11th lap when he threaded the needle entering the third corner to get by Friese for the second spot.

Meanwhile, Berry was running the ragged cushion and after a clout of the outside second turn wall a few laps earlier, a second hit of the wall at the same spot cost him control on the 13th tour as he pulled pitside.

This handed control to Haus who drove away easily to the victory, taking the checkers by 4.344 seconds over Friese.

Shaun Miller of Tower City led the first two laps of the econo late model main before fifth starter Derrick Garman took the lead that he would hold to the finish.

Miller eventually faded to finish fourth while Tim Fedder advanced to finish second after starting in the fifth spot.

Andrew Stotler was third with JR Toner rounding out the top five finishers.

Jeff Miller took the lead from Scott Ellerman on the sixth lap of the 18 lap 305 sprint main but Ellerman refused to give up, challenging Miller all the way to the finish.

Ellerman repeatedly stabbed at the lead with low side moves, sometimes even taking control only to see Miller use his cushion groove to blast back around and reclaim command.

Miller ended up with this third oval win of the season, taking the win by a small margin of .613 seconds over Ellerman.