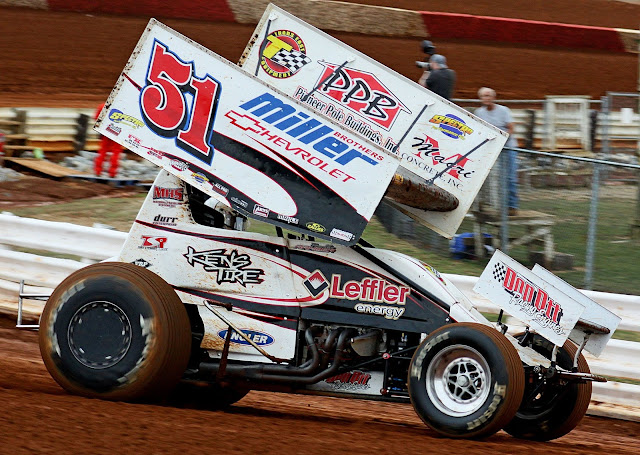 “My Dad won here, My Grandfather won here, I can’t begin to tell you how much it means to win here,” an elated Freddie Rahmer said in victory lane.

Mark Smith of Sunbury, PA and Ryan Smith of Kunkletown, PA led the 26 car field to the green flag. Mark Smith pulled to the lead quickly with Ryan Smith close in tow, and Freddie Rahmer powering past Swindell into the third spot.

The leaders hit heavy lapped traffic on the sixth circuit around the one-third mile – with Mark Smith weaving in and out of cars, extending his lead over the pack. Smith’s sizable lead was short lived as traffic closed the gap between the top runners giving Ryan Smith the opportunity to pounce on Mark Smith.

A Lap 13 red flag flew for Hunter Mackison, who got upside down in turn 2, clearing the boiler plate and landing off the race track. The incident that retired Mackison and Brandon Rahmer.

Mark Smith charged back to the top spot when the race resumed, while Ryan Smith fought hard for the second spot with Freddie Rahmer. Rahmer dove to the inside of the race track crossing under Ryan Smith, but Smith battled back on the inside.

The yellow flag flew on lap 21 for Brandon Spithaler. During the yellow flag, the right rear tire of leader, Mark Smith’s machine went flat sending the No. M1 pit side. Fortunately for Smith, a caution on the restart allowed him to change the tire and rejoin the field.

Ryan Smith inherited the lead and charged to the top side of turn one on the restart, maintaining control on the top side of the one-third-mile speedway. Smith held the top spot for four circuits before Rahmer was able to shoot toward the inside of the race track completing the pass on lap 25.

It was all Rahmer for the balance of the 35-lap feature event, maintaining a lead of five-car-lengths when the checkered flag flew.

Nathan Mohr and Jack Butler led the 24-car field to the green flag with Butler jumping out to the early lead and dominating the first-half of the racing event. Lisowski – from a fifth place starting position – moved into third in the early stages of the event, and despite multi-car battles took the lead just passed the halfway point.

Lisowski’s main challenge came mid-way through the race when Jordan Henn powered from a 12th place starting position to battle for the top spot. No one could dethrone Lisowski, who claimed the victory.

The NAPA Auto Parts Thunder on the Hill Racing Series returns on Saturday, October 14 for Mods at the Madhouse. A Big-Block vs. Small-Block challenge event that also includes Sportsman, and MASS 305 Sprint Cars.

Thunder Notes
– 33 410 Sprint Cars and 41 Sportsman cars were signed into attendance.
– Levan Machine and Truck Equipment of Fleetwood, PA was the presenting Sponsor of the event and displayed snow plows, tool boxes, and other commercial vehicle equipment.
– Chad Kemenah’s Quick Time of 11.545 was close to Jeff Shepard’s track record of 11.433
– Many fans in attendance were on-hand to witness three-time NASCAR Cup Champion, Tony Stewart compete against Arctic Cat All Star Circuit of Champions. Stewart timed ninth in Time Trials, and the team changed an engine after heat race action. Stewart finished 14th in the A-Main
– Popular 410 Sprint Car ace, Rico Abreu competed for the second time of 2017 after participating in this year’s PA Speedweek event.