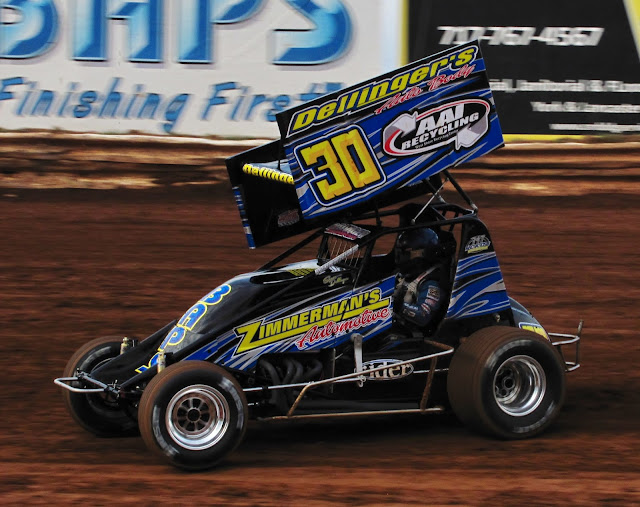 Scott Dellinger made it look relatively easy as he drove to his third win of the season in Saturday night’s 25-lap Credit Connection Auto Sales Super Sportsman feature at Susquehanna Speedway.

Aboard his Dellinger Auto Body, Reesers Soft Serve Ice Cream, AAI Recycling, G. A Smith Towing No. 30, the Lewisberry driver came from his eighth starting spot and held on during numerous cautions and a long red flag to take the win. Dellinger’s second win in the last month also put him on top of the track point lead as the series heads into the final stretch of the season.

Eight time champion Frankie Herr set the pace from his pole starting spot and would hold the lead until his bid for his first win ended when he slowed on the speedway with five laps complete.

Jay Fannasy and Dellinger both got around Nate Young on the restart as Fannasy led lap six before Dellinger made a bold move to take the top spot with seven laps in the books.

As Dellinger pulled away, last week’s winner Russ Mitten and five time track winner Kenny Edkin were working their way to the front.

The race was halted on a lap 14 restart as five cars crashed on the front stretch. The cars of Garrett Williamson and Tom Wyckoff both flipped while Gregg Foster walked to the ambulance after taking a hard hit.

Dellinger quickly pulled away on the restart as Mitten pulled a slider to steal second spot from Fannasy with 16 laps in and attempted to track down the leader. But it was all Dellinger over the final nine circuits as he cruised to a 3.026 margin of victory for his fifth career Susquehanna win.

Mitten held off Edkin for the runner-up finish with Doug Dodson coming from 13th to finish fourth to earn the Artwerks Hard Charger over Fannasy with Paul Miller crossing sixth ahead of Chris Meleason, Mike Enders, Rich Eichelberger and Davey Walsh.

Heats for the 26 Super Sportsman were won by Herr, Young and Miller.

The 25-lap Bernheisel Race Cars 358 Late Model main got off to a rough start as a five car pileup, which saw the car of JR Rodriguez land on its side quickly brought out a red flag.

After the cleanup, front row starter Chase Billet grabbed the lead and would never look back in capturing his first win of the season and becoming the ninth different winner this year.

Justin Weaver chased Billet the entire distance but was unable to make the pass and settled for second ahead of Randy Stoudt, point leader and 10th starter Randy Christine, Jr. and 12th starter Sam Rial.

Stoudt and Weaver were heat race winners for the 17 BRC 358 Late models.

Joey Hoffer led flag to flag to pick up his division leading third win of the season in the Morgan Paving/Aqua Fun Pools Street Stock feature.

Patrick McClane took the lead on the third lap of the 20-lap Superior Homes Extreme Stock feature and raced to his fourth win of the year and second straight checkered flag.

Broderick was the lone heat race winner for the 11 Extreme Stocks.

There will be a Test N’ Tune at the speedway on Wednesday night, August 30 from 6-PM.