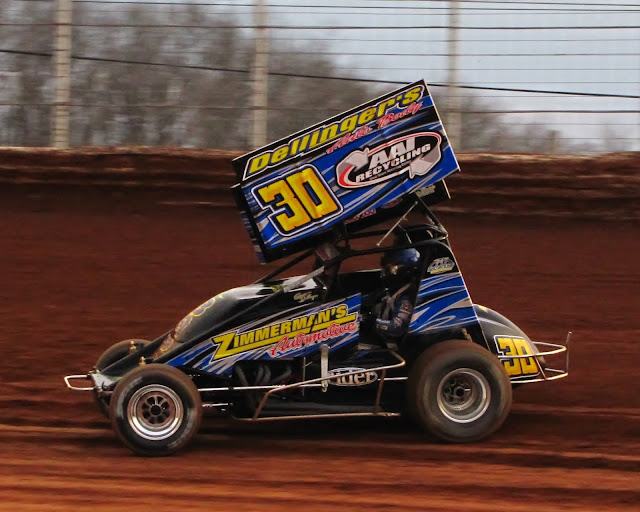 Gregg Foster shot from his fifth starting spot to take command of the Super Sportsman feature with one lap complete.

While Foster checked out from the field, Davey Walsh, eighth starting Dellinger and seventh starting Mitten were working their way to the front.

Foster’s bid for a win ended when his car went up in smoke to bring out the caution with ten laps complete.

Walsh would lead the next lap but it was Dellinger pushing his Dellinger Auto Body, Reesers Soft Serve Ice Cream, AAI Recycling, G.A. Smith Towing No. 30 past Walsh to lead lap 12.

While Dellinger began to stretch his lead, Walsh, Mitten, Mike Enders and 13th starter Jay Fannasy were in a heated battle for top five spots.

A caution on lap 18 for a spin by Nate Young  set up another battle for the lead as Mitten hung tough with Dellinger for several laps before Dellinger would drive off only to see a caution wave on the final lap for a spin by Justin Williams.

Dellinger, of Lewisberry was up to the challenge on the restart keeping Mitten at bay to pick up his fourth career Susquehanna win and moved to within 95 points of Kenny Edkin for the point lead.

Mitten held on for second with 12th starter and last week’s winner Tony Jackson coming home third ahead of Enders and Fannasy with Miller racing back to sixth over Frankie Herr,  Rich Eichelberger, Walsh and Edkin, who was driving the Russ Lebo owned car after his own No. 75 suffered mechanical issues during his heat race.

Heats for the 22 Sportsman were won by Timmie Barrick, Tom Wyckoff and Foster.

Weaver started fifth and took control on lap nine and drove away from the field to become the eighth different winner this season.

Merkel, of Boyertown dominated the makeup BRC 358 Late Model feature that was rained out back on July 5 as he kept Christine at bay during the entire distance as he also scored his first career track win over Christine, Ehrhart, Rial and Rodriguez with Matt Murphy, Hohol, Dave Latsha, Ben Whitaker and Jake Moser finished out the top ten.

Heats for the 22 BRC Late Models went to Christine, Rodriguez and Chase Billet.

Starting eighth, Geesaman grabbed the lead from Jimmy Combs on lap 19 and held on during a final lap caution to score the win.

Heats for the 30 Street Stocks went to Geesaman, Hoffer and Mike Potts with Randy Zechman winning the consolation.

There will be a Test ‘N‘ Tune at the speedway on Wednesday, August 9 from 6-9PM.