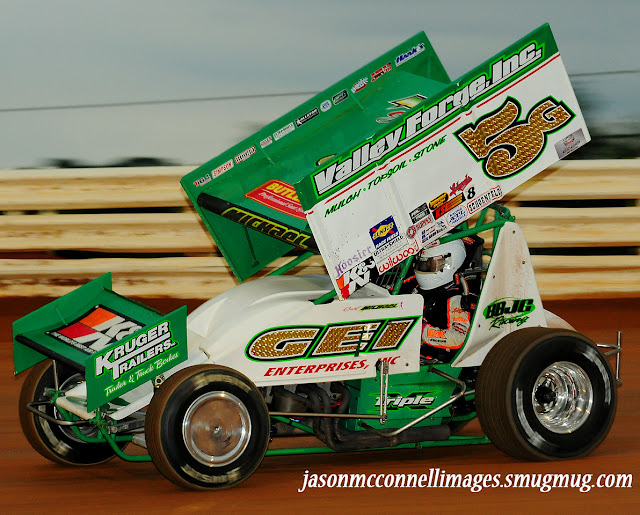 ABBOTTSTOWN, PA, 9/16/2017 - Ocean View, DE driver Curt Michael showed why he is a nine-time URC champion Saturday night at Lincoln Speedway as he took advantage of a last lap restart to slide under race-leader Doug Hammaker in the final turns to the checkered and hang on to win the special 25-lap MACH 1 Trailer Services URC/358 Sprint Challenge. In the process Michael not only collected the $3,000 winners’ purse, but the bragging rights for winning the URC/358 Sprint Challenge.

“I’m sure glad to win and take home MACH 1 Trailer Services $1,000…I appreciate it!, “said a jubilant Curt Michael in regards to the added race sponsorship money which raised the winner’s purse to $3,000 for the night.

The final lap drama was set up when a caution for debris was thrown as the leaders took the white flag with one lap to go. Sixth-starting Hammaker had taken the lead from polesitter and race-long leader Chris Coyle on the 15th lap and appeared to be on his way to the 25-lap feature win.

Seventh-starting Michael was frantically trying to keep pace with the leaders and got by Coyle for the runner-up spot a lap later on lap 16.

Michael got his first chance to challenge Hammaker for the top spot with a caution restart with three laps to go. But Hammaker got a good restart and easily kept Michael behind him.

Debris in turns one and two brought out the caution just as the leaders got the white flag signaling one lap to go, giving Michael one more shot at the win.

But the excitement didn’t end there.

As Michael and Hammaker took the checkered, Michael took his foot off the throttle and slowed. Hammaker appeared to still be at full throttle as they approached turn one and caught the right-front wheel Michaels. Hammaker then was launched into a series of violent end-over-end flips and came to a rest along the outer concrete wall with Michaels spinning on three wheels also sliding into the wall backwards.

After picking up the pieces of his damaged winning sprint car, Michaels’ Bill Gallagher-owned GEI/Valley Forge, Inc./Kruger Trailers/Lelands.com/BK Trucking was towed to the post-race scales and then finally to victory lane.

“I got a read on how (Hammaker) was restarting the race on the restart before that last one,” said Michael on his final lap restart strategy. “He got me on that restart before (lap 22), he caught me sleeping. That next one (the final lap) I stayed on him. I wasn’t sure if I could get a good enough run on him to slide him and win the race.”

Meanwhile Hammaker slowly got out of his destroyed car and was eventually transported to a local hospital where it was it later reported he had a fractured right leg, a very bruised left leg, and a sore right hand/wrist.

The enormity of the moment was not lost on Michael in victory lane.

“I can’t thank these guys enough who showed up,” exclaimed Michael when asked about the huge turn-out for the special URC/358 Challenge. “54 cars! URC winning the thing! I couldn’t thank them (racers) enough for showing up…we could have a real nice rivalry between URC and the 358s here. I also want to thank these fans for showing up. I know we’re up against the Selinsgrove National Open tonight but I think we put on a pretty good show for the fans that did show up.”

Heats for the 54 sprinters were won by Chris Allen, Jr., Chandler Leiby, Jeff Halligan, Gohn, and Hammaker. Twin consolation were won by Gracey and Steve Drevicki.


Jonestown’s Bryan Bernheisel was the class of the Precise Racing Products 358 Late Model field as he led all 20 laps from his pole position to pick-up his first career Lincoln Speedway win.

But the win was not easy as he had to hold off Gene Kanub, Bobby Beard, Cam Zeigler, and Robbie Emory over the closing laps for the win.

Heats for the 24 358 Late Models on hand were won by Bryan Bernheisel, Cam Zeigler and Bobby Beard.

Next Saturday, Saturday, September 23rd, Lincoln will hosts its’ biggest race of the year with the FOURTH ANNUAL “DIRT CLASSIC” for the 410 Sprints ($20,000 to win) PLUS FIREWORKS. Time trials are scheduled for 7:30 PM. Pit gates will open at 3:30 PM, admission for advanced ticket holders 3:45 PM, with race night tickets going on sale at 4 PM.