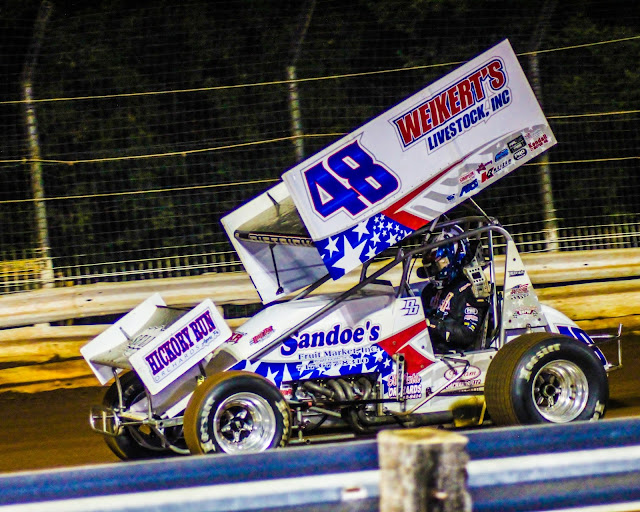 YORK HAVEN, PA…9/21/17
Danny Dietrich used a bold move on a lap 12 restart and never looked back as he raced to his first win of the season at Susquehanna Speedway in Thursday night’s BAPS Auto Paints and Supplies 410 Sprint Series feature.

It was an eventful night for Dietrich, who ran out of fuel during his time trial laps resulting in a fifth place start in his heat race. With the top two finishers in the heat going to the dash, Dietrich blew through the field in the heat to finish second and put himself into position to capitalize in the dash.

He lined out fourth for the 30-lap feature as Missouri driver Brian Brown grabbed the lead from his front row starting spot.

Brown, who won both events he competed in last weekend in Central PA, was looking to make it three straight but his run out front ended on lap 11 with a right rear flat tire.

This turned the lead over to fellow starter Brian Montieth, who led lap 12 before a red for Mike Walter halted action.

Dietrich was ready on the ensuing restart, using every inch of turn two to sneak by Montieth and take the lead but the race quickly returned to red after James McFadden’s attempted slide job resulted in a hard crash in turn four that also collected Greg Hodnett, who had worked his way up from his 12th starting spot.

With an open red flag, Hodnett’s team changed the top wing and he lined up third on the restart behind Dietrich and Montieth.

Hodnett disposed of Montieth on the restart and set his sights on Dietrich, who had opened a near three second lead at one point.

Hodnett began to close the gap on the fast running Dietrich and was running about two seconds off the pace when the Mike Heffner owned car went up in smoke with 20 laps down.

It was all Dietrich over the final laps but the action for the runner-up spot was fierce as Montieth, Tim Kaeding and Brock Zearfoss traded sliders several times before the checkered flag.

Dietrich crossed 1.321 seconds ahead of Montieth for his 11th win of the season with Kaeding third, Zearfoss fourth and Lucas Wolfe fifth.

Brown paced the 21 car field in time trials with a lap of 15.272 seconds as heats were won by Kaeding, Wolfe and Walter. Montieth won the Dash.

Hayden Pascoe raced to his first win of the season in the 20-lap ServiceMaster Clean Central PA Legends feature.

Pascoe started fourth and dominated much of the event as he picked up the win over Travis Perry, eighth starting Bob Stough, 17th starting Don Leiby and Trent Yoder.

The seventh and final BAPS 410 Sprint Series event will close out the season at Susquehanna Speedway on Saturday, October 28 when the Sprint Showdown for 410 Sprints will highlight the action. Joining the 410’s that day will be the 358 Sprints. Race time will be 4PM.