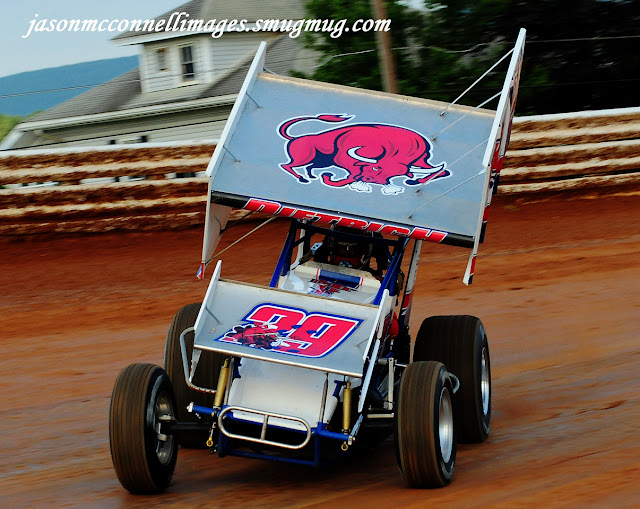 Port Royal – For the third year in a row, the Port Royal Speedway Labor Day Classic for sprint cars was a true classic with multiple leaders and action at the front that kept the fans guessing all the way to the finish.

In the end on Monday afternoon, it was Gettysburg’s Danny Dietrich taking his third career Labor Day checkers and second in a row in a rousing finish that even surprised Brock Zearfoss, who exited turn four thinking he was going to win the race along with the throng of fans in attendance.

The 66th annual running of the prestigious event, sponsored by Foss Jewelers of Lewistown, saw Dietrich take home $4,000 for the payday and primed him with confidence for this weekends two-day, 50th annual Tuscarora 50 races.

In the 355 econo-late model main it was Petersburg’s Eric Irvin taking the victory while Eric Boozel took the four cylinder main.

Blaney was leading with five laps down when the caution flag unfurled for a stopped Vince Snyder.

At that time Brock Zearfoss was hounding Blaney for the lead while Dietrich raced sixth.

The last 20 laps went non-stop in what turned into a hair raising affair with Zearfoss ducking under Blaney for control on a few occasions before finally getting the top spot with a low swoop in the first turn with 14 away.

Meanwhile, the cars of Lucas Wolfe, Dylan Cisney and Dietrich were working forward, battling between themselves for position under a blanket while gaining on the leader.

Dietrich made his presence known for sure at the front on the 18th lap when he made a bold two-car pass of both Wolfe and Blaney to blast from fifth into second.

And with that the race was on as Zearfoss worked traffic and Dietrich cut into his advantage.

Still, Zearfoss looked relatively safe at the front as he rode the cushion nearly flawlessly as the race neared its finish.

However Dietrich was like a lion stalking his prey, repeatedly swooping across the third and fourth turns to catch the cushion while trying to cut down the leader’s advantage.

And by the time the white flag unfurled, Dietrich was within striking distance but still in need of a fantastic move in order to steal the win with another final, last turns swoop in the third and fourth corners.

However Zearfoss slammed the door in turn three and thwarted what may have been Dietrich’s swoop.

And with that, Dietrich rode the cushion through the turns as Zearfoss slid up and caught the cushion off of the fourth corner in order to jet toward the finish line.

Zearfoss then shot onto the frontchute headed for the checkers and in fact was seen pumping his fist out of the cockpit as he sped toward the checkers.

And just then, a little slip by Zearfoss and a tremendous bite by Dietrich off of turn four as he turned the car down across the frontstrech stunned the fans and Zearfoss as Dietrich drove by for the payday as the cars got to the edge of the stage, just feet from the finish line.

The margin of victory for Dietrich was a scant .111 seconds.

Dietrich went to victory lane, the fans were left speechless and Zearfoss was relegated to bridesmaid.

Dylan Cisney kept his title hopes alive with just two races to go this weekend by driving his way into third at the finish although his margin in the points is now shrunk to 85 markers over Zearfoss.

Eric Irvin led all 18 laps in the econo late model main to pick up the victory by 2.421 seconds over Ryan Walls.

Irvin started sixth in the field for the victory.

Eric Boozel led all 15 laps of the four cylinder main for the win over Kent Leonard, Travis Brown, Matt Worley and Justin Williamson.