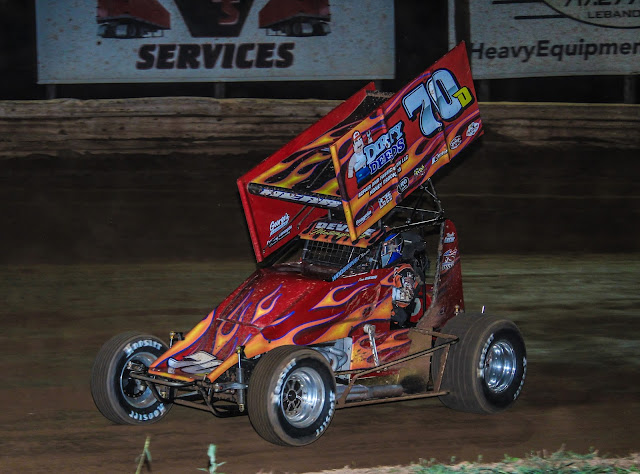 It appeared a first career winner would come away with the win in the Super Sportsman main as Nate Young set the pace during the first 14 laps but Garrett Williamson used a restart to take the lead and was looking for his first win as he led until lap 18.

That was when Herr, who had lined up 10th on the grid, arrived at the front of the field after methodically working his way forward. Herr drove by Williamson on the 19th lap as Williamson attempted to stay close but Herr’s Devine Motorsports No. 70D was too much once again for the rest of the field as he posted his second win of the season in the final points race for the year.

Williamson settled for a season best runner-up finish with Mike Enders coming home third as Young held on for a fourth place finish with Matt Ondek completing the top five.

Mitten was the Hard Charger for the race after starting 19th. He flipped during his heat race then worked his way forward in the feature only to stop on lap 15. He restarted at the rear and came back for the top ten finish as he finished runner-up in season points.

Herr and Ondek were heat race winners for the 20 car field.

Shuey and Lusk were heat winners for the 17 car field.

Craig Morgan turned in an impressive effort in his second win of the year in the Morgan Paving/Aqua Fun Pools Street Stock feature.

Morgan started back in the 13th spot and went out front with 16 laps in the books to capture the win. Morgan took the lead from Bob Scott, Jr. who had led the first eight laps and then again on the 15th lap. Morgan withstood ten caution flags during the 20-lap event.

Travis Horan led laps three through 18 of the Superior Homes Extreme Stock feature but gave the lead up to point leader Alex Updegraff on the 19th circuit.

But Horan battled back and used a thrilling final lap pass to score the win, his second of the year over Updegraff, Bill Powell, Patrick McClane and Jeff Gill.

McClane and Michael Smith won heats for the 17 Extreme Stocks.