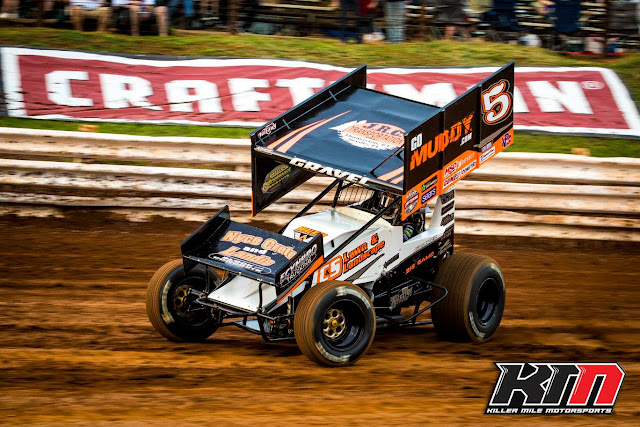 “It’s crazy,” said Gravel, of Watertown, Conn. “I knew the track was going to end up doing that taking rubber and cleaning up around the bottom. I made a mistake on the restart and gave McFadden the bottom and was able to rail the top in three and four and get him back. I was really lucky that happened because if it didn’t I probably wouldn’t have won the race. I made a mistake, I was able to recover and able to hold on. There’s some cords showing from the tires. I didn’t want that last caution even though I was behind the lapped cars. I knew if I didn’t mess up it wouldn’t be an issue.  I was worried about weight and blowing a tire. I’m happy to get another one here and solidify myself here. Three wins at the Grove in one year is pretty awesome.”

Schatz started second and drove into the race lead over polesitter Gravel and sixth starter McFadden on the opening lap.

Schatz built a quick one-second lead, but Gravel began to close passing Schatz with an inside move off turn four completing lap six as the leader.

Schatz passed Gravel off turn two retaking the lead on lap 11, but Gravel took it back and passed Haudenschild and another car to give himself a two-car cushion.
McFadden passed Schatz in turn two taking over the second spot on lap 17.

Brian Montieth’s slower sprinter in turn two brought the field under caution with 18 laps completed. Gravel took the outside position for the double-file restart.

McFadden drove under him in turn two taking the lead. They were close at the line the next time by with McFadden leading.

Gravel took the lead back in turn four and they were nose-to-tail at the line completing lap 20.

Shane Stewart stopped in turn three on lap 21. Gravel went to the top again and maintained the lead as Schatz passed McFadden back for second.

By lap 26, the racing had shifted to the inside lane around the speedway. A crash off turn two brought out the red flag with 12 laps to go. Stewart was a flip victim.
Brad Sweet, Kraig Kinser and Jason Johnson were also involved. Crews were allowed to refuel under an open red.

Gravel picked the inside for this restart, but the red flag came out again when Kinser flipped in turn one and Sweet was also involved again.

The restart was single-file this time.

Gravel controlled the pace as Logan Schuchart was the only driver trying the top in turn four. Schatz began to close with a few laps left and was on Gravel’s bumper in turns one and two and looked like he was about to try a move when the caution flew as Brian Brown slowed on the backstretch with two laps left.

The mechanics of the top three finishers – Barry Jackson, Ricky Warner and Matt Highlands – all graduated from Big Spring High School in nearby Newville.

The top four drivers in total points from Thursday and Friday were locked into Saturday’s dash and included Schatz, Gravel, McFadden and Daryn Pittman. The heat races were lined up straight-up by points with Stewart, Kerry Madsen, Lucas Wolfe and Greg Hodnett winning those. Gravel won the dash and Sweet the Last Chance Showdown after a mechanical problem in his heat race.