Potts, Dove and Montgomery All Get Second Susky Wins 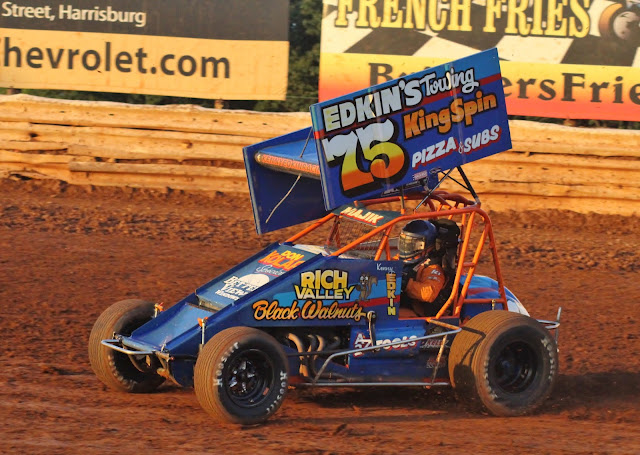 Veteran Rich Eichelberger set the pace for the first three laps of the Harvest Classic before slowing on the speedway to bring out the first of eight caution flags during the main event.

This turned the lead over to 2017 track champion Scott Dellinger who would hold the point until the 10th lap when eighth starting Edkin drove by to take the top spot.

Edkin, of Marysville, pulled away from Dellinger but was kept at bay with all of the yellows but each time, Edkin showed strength by extending his lead.

The final caution of the race flew on lap 32 as Edkin pulled away to a 2.320 second advantage at the checkered flag aboard his family owned No. 75.

Enders set fast time over the 27 car field in time trials with a lap of 18.656 while heats were won by Dellinger, Edkin and Fannasy. Justin Foster earned the Hard Charger after starting 17th.

Charles Potts took command after starting second and would hold the lead but it was Dan Zechman who came on strong during the final laps to make this one a thriller as Potts raced around the inside of the track while Zechman pounded the top looking for the lead.

But Potts would prevail by a scant 0.169 of a second for his second win of the year over Zechman. Track point leader Randy Christine, Jr. crossed a distant third over Bryan Bernheisel, Brian Shuey, JR Rodriguez, Jake Moser, Steve Billet, Sean Merkel and Jed Latshaw, the race’s Hard Charger after lining up 20th.

Christine, Zechman and Shuey won heats for the 21 car field.

Randy Zechman dominated the caution-marred 20 lap Street stock main and crossed first  but after failing post race inspection, Steve Dove was rewarded with his second feature win of the year.

Heats for the 21 street stocks were won by Mike Buckley and Zechman.

Harlon Leppo led the first 13 laps before Montgomery took the lead as he then had to fend off late race challenges from Haydon Pascoe before taking the win, 0.214 seconds ahead of Pascoe with Leppo crossing just 0.428 seconds back in third. Fourth went to Scott Houdeshell over 12th starting Mason Chaney.

There will be a Test N’ Tune on Wednesday, October 11 at from 6-9PM at the speedway.