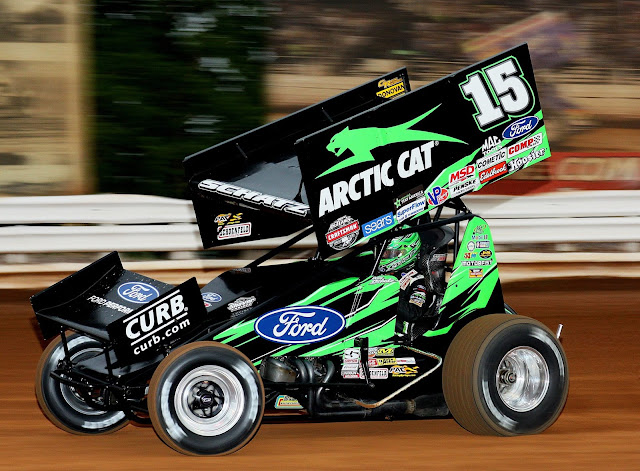 In the 25-lap Mid Atlantic Modified main it was Mike Altobelli scoring the $1,000 victory.

Reigning 2017 track champion Brock Zearfoss started on the pole of the 30-lap World of Outlaws main for sprint cars flanked by Jason Sides with Schatz starting in third and Dewease starting in ninth spot.

Zearfoss of Jonestown took the lead at the start over Sides however Schatz motored into second on the third lap as Zearfoss held a 1.669 second lead.

Alone out front, Zearfoss was setting a blistering pace and entered the rear of the field on the seventh tour with Schatz in tow and Dewease up to fourth.

Zearfoss worked his way through traffic in fine fashion over the next seven laps and was keeping Schatz at bay, still holding a one second lead when the races first caution flag unfurled on the 14th tour for a stopped Logan Schuchart.

Zearfoss chose the inside lane for the double file restart with Schatz in second and Dewease restarting third with Brad Sweet in fourth.

And Zearfoss turned in a great restart when action resumed, outracing Schatz into the first corner and turning back a slide job attempt by Schatz for the lead.

However racing close with Schatz, nose to tail at times, proved hard to handle for Zearfoss as the pair raced into the second half of the race and on the 18th tour when Zearfoss entered in the middle in the first turn, leaving the top lane open, that was all Schatz needed to blast into control.

Moments after taking the lead, on the 19th lap, the second caution flag of the race appeared regrouping the pack, this time finding Schatz choosing the inside pin for the restart.

Dewease blasted into second on the restart, coming up .67 seconds behind Schatz at the line with 10 to go but was then outdistanced by Schatz during the waning laps before a final yellow flag set up a dramatic finish.

When green reappeared, Schatz went high into the first turn and Dewease blasted in low, going out in front briefly as he let the car slide up across the track to get command.

However Schatz would later credit Dewease with allowing just enough room for him to jet back by as the pair shot out of the second turn and that sealed the deal for Schatz, who went on to pick up his 19th overall checkers of the season by .792 seconds ahead of Dewease.

After starting 10th, Daryn Pittman finished on the podium in third followed by Sweet and Johnson.

Heats for the 40-car field went to Jason Johnson, Sheldon Haudenschild, Sweet and Schatz with Tony Stewart claiming the B Main and Zearfoss winning the dash.

Overall fast time in qualifications was set by Jason Johnson with a lap time of 15.704 seconds, an average speed of 114.162 mph.

Rick Hulson led the first six laps of the Mid Atlantic Modified main before Mike Altobelli took over to speed to the victory.

Hulson would finish second with Dan Davies ending up third.

Heats for the mods went to Mike Corbin and Altobelli.