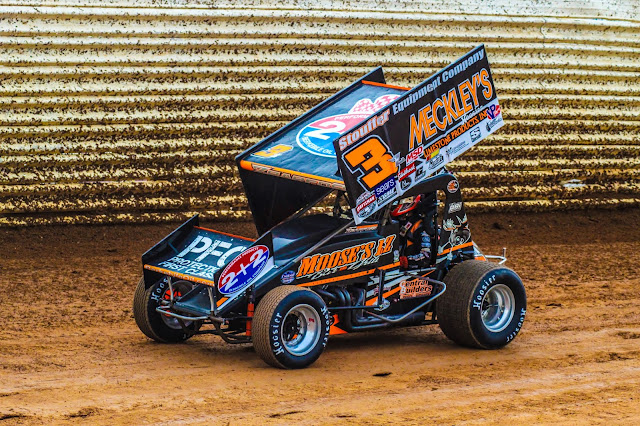 In the 25-lap 410 sprint main, polesitter Dylan Cisney beat Brock Zearfoss into the first turn only to see Zearfoss take the lead as the pair shot onto the backchute.

The reigning 2017 track champion, Zearfoss of Jonestown set a blistering pace around the oval during the early going, entering the backmarkers on the seventh tour with Cisney and fourth starter Danny Dietrich in tow.

At the halfway point, Zearfoss had a 1.1 second lead over Cisney as the race for second heated up between Cisney and Dietrich.

After repeated attempts, Dietrich was able to secure second spot and complete lap 18 just before the only caution flag of the race unfurled for a stopped Kody Lehman.

Dietrich followed Zearfoss high into the first corner when action resumed and then made his swooping attempt for the lead as the pair shot into the third turn.

However the Gettysburg driver came up short of completing his slide job attempt in the fourth turn and instead settled into second, where he would finish.

The $4,000 victory was the fifth of the season at the Port Royal oval for Zearfoss who took the checkers by a 1.926 second advantage.

Heats went to Macri, Zearfoss, Justin Barger and Shultz in what was two rounds of heats for each of two heat groups.

Greg Hodnett started seventh in the field and bolted to the front of the race with lightning speed during the early going, up to third with five laps recorded.

As Layton worked through traffic, Hodnett rapidly closed the gap on the two leaders before pulling off a high-flying two-car pass of both Wolfe and Layton for position plus at least one backmarker in the third and fourth turns of the ninth lap.

And once at the front, Hodnett drove off from the field only to be slowed by the caution flag with nine laps to go.

Wolfe got a clean shot on the restart only to see Hodnett drive off before another yellow with six laps to go again bunched the field.

Another restart produced the same result with Hodnett staying out front only this time 10th starter Brock Zearfoss motored by Wolfe into second before trying to run down the pacesetter.

Zearfoss did his best to close the gap but came up short at the finish by .537 seconds.

Wolfe was third followed by Curt Michael and Mark Smith.

Austin Bishop of Elverson wired the 20-lap 305 sprint main with a flag to flag performance.

The only caution of the race took place with just one lap to go and it produced a wild final lap and a four-car race for the win back to the line.

But Bishop moved down to block his advance on the backstretch and Miller climbed his tail tank before jerking sideways toward the inside fence and then somehow saving the car.

This bottled up Gramley and allowed Smith to motor by both he and Miller during the final half lap.

Miller crossed the line in third followed by Gramley and Cale Riegle.

Heats went to Miller, Shatzer and Smith with the consolation race going to Brad Mellott.