410 SPRINTS, OPEN PRACTICE FOR OTHER DIVISIONS NEXT SATURDAY AFTERNOON 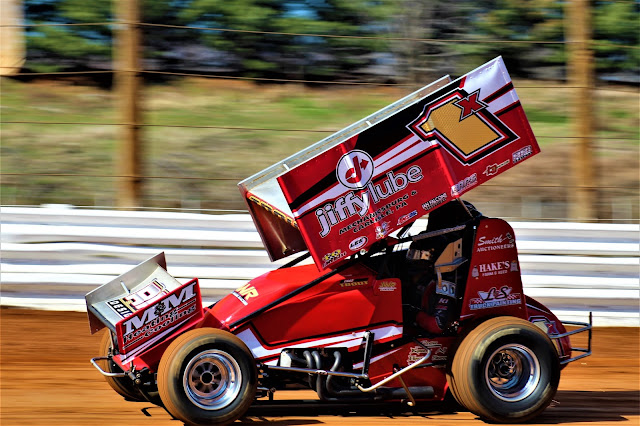 By virtue of a top-10 redraw for the feature, Trout started on the outside of the front row to Lucas Wolfe who started on the pole. Wolfe led the opening lap, but, disaster struck for three of the top driver as Wolfe suddenly slowed in turn 2, leading to a Brian Montieth spin collecting Danny Dietrich in the process. Dietrich and Wolfe were done for the day, handing the lead over to Trout.
From there Trout led the field until second-place invader Cole Duncan ran into the spinning cars of Scott Fisher and Cory Haas in turns three and four of lap five.

Brandon Rahmer caught Kyle Moody for send on the restart and chase him the rest of the way. But Rahmer’s father, Fred, may have unknowingly helped Chad to his first win.

“I saw Fred (Rahmer) walk out on the track, commented Trout about the 21st lap caution. “I slowed up as much as I could, and I saw him motion to Brandon to move up in turn one, so I rolled around the corner and looked at the track, and it was black-slick from the bottom to the top, so I’m like ‘I think I know what he means.’ So I just rolled the outside.

With that, Trout surged out in front on the race’s final restart and led the final nine laps and took the checkered 1.731 seconds in front for his inaugural 410 sprint win.

“All these people back here standing behind the car believe in me,” said Trout upon exiting his Jiffy Lube/Egg Farm No.1X in victory lane. “They believe in me more than I do. I owe it all to them. Jim (Walker) passed away last year, and I wanted to win for him. Randy Oberlander and his wife Steph bought the team and I couldn’t ask for better owners. All the people back here deserve it as much as I do.

At the checkered, Brandon Rahmer settled for second, with Moody third, Gerard McIntyre Jr. fourth, and Greg Hodnett fifth. Sixth through 10th were Freddie Rahmer (Who flipped in warm-ups and made repairs for his heat), Jim Siegle, hard charger Alan Krimes (who started 20th), Tim Glatfelter, and Glenndon Forsythe. Montieth ended up coming back following the 2nd lap mishap to finish 11th.

Heats for the 20 410 Sprints were won by Danny Dietrich and Greg Hodnett.

“This is a tough sport. Track conditions kinda played in my favor. The wind’s horrible. You drive both ends of the track differently. I’m sure it was hard to pass in traffic. You couldn’t get through lapped cars, and they’re doing what they have to do. If someone would have been right on me, they should have been able to pass me. My crew chief Brandon is doing a great job, and I owe it all to the whole team.

Next Saturday, March 10th, Lincoln Speedway returns with another single-division 410 sprint car show. Then immediately afterwards an open practice session will be held for all regularly-scheduled divisions. Gates open at noon, with qualifying to begin at 2 PM.