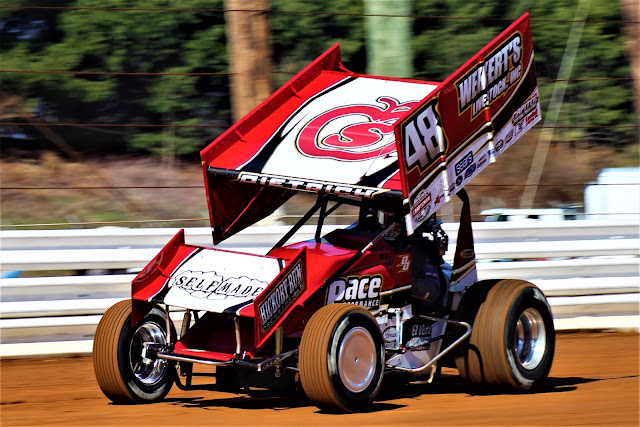 GETTYSBURG, Pa. (March 5, 2018) – After opening his Pennsylvania season with an appearance at Lincoln Speedway for the annual Icebreaker 30 on Saturday afternoon, “Double-D” Danny Dietrich will switch gears and aim for three starts during the upcoming weekend, planning to do the “Central Pennsylvania Double” comprised of two starts in one day on Saturday, March 10, followed by an afternoon start on Sunday, March 11.

Dietrich’s Icebreaker 30 appearance started strong, but ended short. After winning his respective heat race, Dietrich lined up seventh for the 30-lap main event. With only one lap recorded, the Gettysburg native was wrapped up in an on-track tangle which involved two other competitors. Dietrich would not return.

“That’s not how we wanted to start our season in Pennsylvania, but it is what it is,” Dietrich said, driver of the Gary Kauffman Racing/Weikert’s Livestock/Sandoe’s Fruit Market/Pace Performance/Gsell’s Whitetails/Hickory Run Orchards/Drop Of Ink Tattoo/Sweeney Cars/Self Made/ No. 48 sprint car. “The leader spun in front of us and we had nowhere to go. Nobody likes to be on the receiving end of something like that, but it’s a racing deal. We’ll aim for three, good finishes this weekend and get back what we missed at Lincoln on Saturday.”

If all goes according to plan, Danny Dietrich will make two, separate starts on Saturday, March 10. The defending Central PA Sprint Series presented by Hoseheads.com point champion will not only make an appearance at Lincoln Speedway in Abbottstown, but he will also join the field at Port Royal Speedway in Port Royal for its season-opening program later that evening. Lincoln Speedway’s program is scheduled to begin at 2 p.m. and Port Royal Speedway’s program is scheduled to begin five.

Ending the busy weekend, Danny Dietrich will visit the world-famous Williams Grove Speedway in Mechanicsburg for its season-opening program on Sunday afternoon, March 11.

“Things are really going to have to go our way for us to pull off the double on Saturday,” Dietrich continued. “It’s all going to mold around timing. If Lincoln’s program runs quick, and we can run a consistent program without getting banged up, then we’ll make an attempt at completing the double. We’ll see soon enough.”

2018 Highlights: Earned three top-ten finishes against the Arctic Cat All Star Circuit of Champions presented by Mobil 1 during trip to Florida in early February, all highlighted with a seventh place finish at Volusia (Fla.) Speedway Park.