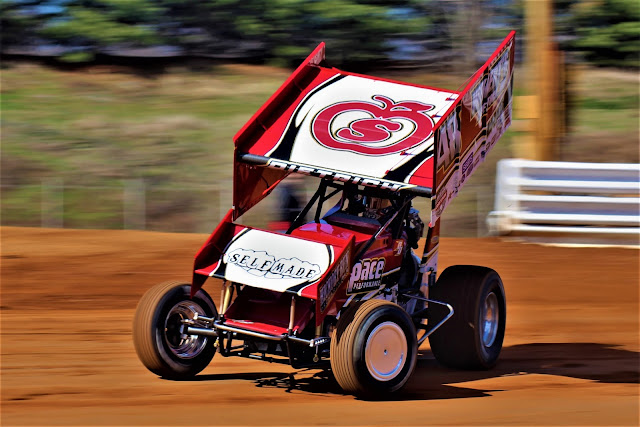 ABBOTTSTOWN, PA 3/10/2018 – “I think I’d rather forget about last week,” said Danny Dietrich upon exiting his Weikert’s Livestock/Sandoe’s Fruit Market No.48 in victory lane. “It feels good to be standing here today.”

“These guys (crew) put in a lot of hard work over time and so did I. To be good and get a daytime win here (feels real good)…last year it wasn’t over until it was nighttime.”

Fourth-starting Dietrich of Gettysburg followed polesitter and race-long leader Lucas Wolfe through the first half of the 25-lap feature before edging by for the lead at the start-finish line of the 14th lap. The caution waved for a spinning Chris Prior just before they got into the first and second turns, making the pass official even though the lap didn’t count as half the field didn’t cross the line before the caution actually waved. From there Dietrich was able to keep Wolfe behind him the rest of the way to claim his first win of the year and the $3,500 top prize that went with it in the 25-lap 410 sprint car feature at the Fabulous Lincoln Speedway Saturday afternoon.

“His car was really good,” said Dietrich on battle with Lucas Wolfe for the second week in-a-row. “He could really drive through the middle and drive the top pretty good and be pretty stuck.”
“I just felt the bottom was a good place to be. I got down there and stuck to it and made it my preferred line. Down there (turns one and two) you could move around. You could get on top and on bottom. I was just trying to make some moves. He’s got a fast car and he been hard to pass. I really wasn’t sure (if he could pass him).”

For the second straight week, Wolfe started on the pole, and led the first 13 laps before yielding to Dietrich, who had caught second-starting Kyle Moody for the runner-up spot on lap nine. Dietrich chased Wolfe after moving into second place, but was waiting for the right moment to make a bid for the lead. Dietrich found the opportunity exiting the fourth turn on the 14th lap and edged by at the line to complete the lap.

An 18th lap caution for a spinning Caleb Helms gave Wolfe one last opportunity to retake the lead from Dietrich. But Dietrich was up to the challenge and raced to a 1.215-seconds win in front of Wolfe for his 39th career win at the Pigeon Hills oval.

“I was pretty good before that last caution came out,” revealed Dietrich afterwards. “I didn’t feel like my car was as good after that caution and I wasn’t sure with all the (previous) cautions that my tires were sealing over a little bit or whatever.”

“I had him at the line (just before the caution came out) and who knows if I would have made it through one and two in front of him…I’m just glad to beat him.”

Heats for the 25 410 Sprints were won by Wolfe, Caleb Helms (who was collected in Freddie Rahmer’s spin on lap 12 of the feature and then spun again in turn two of lap 19), and Cory Haas whose early season woes continued with a spin from his sixth-starting spot at the drop of the green in the first two turns of the feature. Haas did come back through the field to finish 11th.
Next Saturday, March 17th, Lincoln Speedway returns with its final afternoon show, but its first 2-division show, of 2018 with the 410 Sprints being joined by the Central PA Legends. Gates will open at noon, with heats beginning at 2 PM.