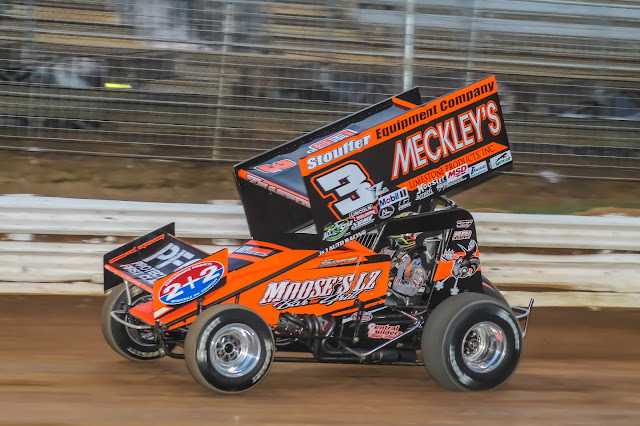 JONESTOWN, Pa. (April 23, 2018) – Doing so in fantastic fashion, the “Jonestown Jet” Brock Zearfoss scored back-to-back victories in Central Pennsylvania during the recent weekend, cracking into the win column at Williams Grove Speedway, as well as at Port Royal Speedway, on Friday and Saturday, April 20-21, respectively. For Zearfoss, the pair of wins increased his career total to 11, also amassing a pair of wins in 2016, followed by seven in 2017.

Zearfoss earned his trip to victory lane at Williams Grove Speedway with a late-race maneuver around race-long leader, Bill Balog, catapulting beyond the “North Pole Nightmare” after a restart with five circuits remaining. The Jonestown, Pa., native started sixth on the grid.

In a little different fashion, Zearfoss’ victory at the Port Royal Speedway “Speed Palace” was accomplished from the front row, leading all 25 circuits around the Juniata County Fairgrounds half-mile from the outside-pole position. Zearfoss earned his front row starting spot by way of passing points; finishing first and fourth during two rounds of heat races.

In addition, Zearfoss earned a top-five finish during the United Racing Club portion of the program on Saturday night at Port Royal Speedway, concluding his Open Wheel Madness campaign with a fifth place performance after starting on the outside of row four.

“Man, this is awesome,” Zearfoss said, pilot of the Brock Zearfoss Racing/Moose’s LZ Bar & Grill/Meckley’s Limestone/Central Builders Supply Co./Berkebile Oil Company/BAPS Auto Paint & Supply/Creekside Roofing and Siding/Invisible Glass/Heavy Equipment, Loaders & Parts Inc./No. 3Z sprint car. “The first win of the season is always the hardest to get, but to get two in one weekend says so much about this team. We’ve been working our butts off trying to get our cars where they need to be. We definitely got our Maxim Chassis rolling this weekend. This is the confidence boost we needed heading into Mansfield’s World Championship.”

Up next on the schedule, Brock Zearfoss and Brock Zearfoss Racing will make the tow west to Mansfield Motor Speedway in Mansfield, Ohio, for the inaugural Sprint Car World Championship. The $100,000-to-win blockbuster will take shape on Friday and Saturday, April 27-28, and will kick-off officially with a practice round on Thursday, April 26.  Zearfoss is certainly no stranger to Mansfield’s dirt surface, finishing fifth at the state-of-the-art facility during the inaugural Great Lakes Dirt Nationals in August.