Cory Haas back on top; Set to challenge All Stars at Williams Grove and Port Royal 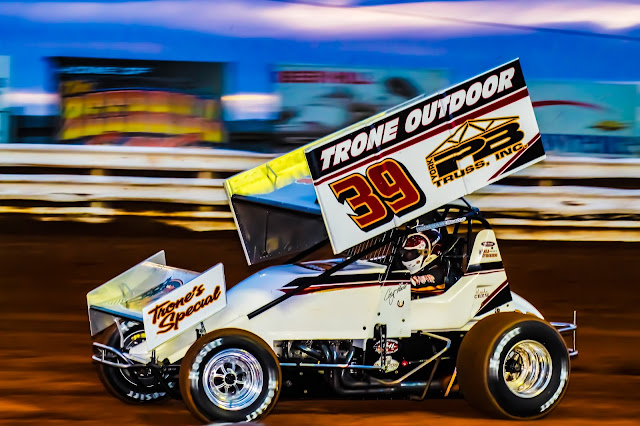 Although impressive, Haas’ triumph at the world-famous dirt oval did not occur unchallenged, forced to fend off persistent charges by “The Edge” Brian Montieth during the closing circuits to secure a seventh-career Williams Grove Speedway victory.

“Man, this feels good. This has been a long time coming,” Cory Haas explained, driver of the Trone Outdoor Motorsports/Trone Outdoor Advertising/Eagle Evergreens/Bricker’s/No. 39 sprint car. “We’ve been working hard trying to get this car where it needs to be. I think we finally found it.”

Nearly repeating success on Saturday night during his visit to the “Fabulous” Lincoln Speedway, Haas padded his Williams Grove Speedway victory with a top-five performance in the Pigeon Hills, crossing under the final checkers fifth in the running order after battling as high as second during certain segments of the main event.

“I can’t thank my family and my supporters, especially John Trone, enough for this opportunity,” Haas continued. “Getting a victory for John means a lot. Hopefully this is the first of many.”

Cory Haas and Trone Outdoor Motorsports will continue their 2018 campaign with a pair of Arctic Cat All Star Circuit of Champions presented by Mobil 1 events in Central Pennsylvania, joining the Indiana-based Series at Williams Grove Speedway and Port Royal Speedway on Friday and Saturday, April 13-14.  Each event will award $5,000 top prizes.

Follow Cory Haas on all of the available social media networks including Facebook: https://www.facebook.com/groups/665179853507583/. Keep up with Cory Haas online at www.fullyinjected.com, as well as at www.troneoutdoormotorsports.com.