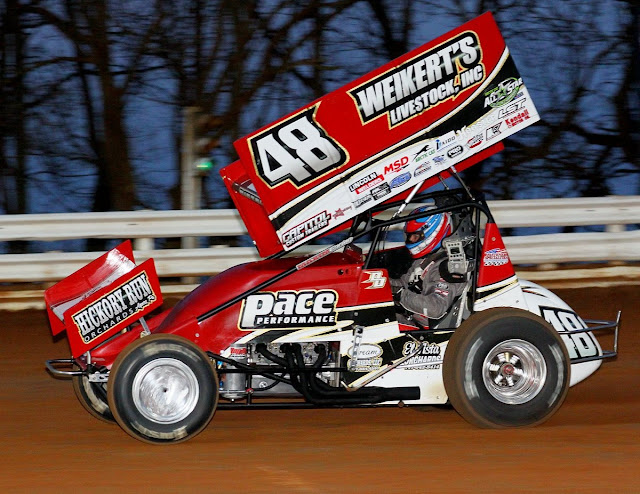 ABBOTTSTOWN, PA 4/21/2018 – “It’s good to be back home here at Lincoln.”
So said Gettysburg’s Danny Dietrich after wiring the field, leading all 25 laps en route to his second win of the season at the Fabulous Lincoln Speedway Saturday night.

Dietrich started outside the polesitter Glenndon Forsythe for the start of the 25-lap $3,500-to-win 410 Sprint feature, grabbed the lead at the drop of the green, and withstood the challenges of last week’s feature winner Freddie Rahmer for 24 laps to pick up his 40th career win at the Pigeon Hills oval, placing him in a tie with Lance Dewease for eighth all time.

“It feels good to come down here and get a win,” said Dietrich following his traditional wing-dance in victory lane. “We’ve been having trouble with getting to tracks that are (racey) to race on, and Lincoln’s always good…that’s why we decided to come here tonight.”

“It’s close to home,” Dietrich quickly added. “We’re kind of tired of the hour and a half drive in a sense and it’s gets kind of boring and lonely on the way home when you don’t run good.”
A caution on the third lap for a Zach Eucalano spin put third-starting Rahmer and fourth-starting Alan Krimes right behind him.

“The format they got is rewarding, said Dietrich on Lincoln’s qualifying format that places emphasis on the heat races as they line-up the feature field “heads-up from there finish. “I think it’s putting on a hell-of-a show for the fans in the heat races…I talked to Alan last year about doing this format and I think it pays off.”

“I was a little worried the first couple of laps in the heat race,” Dietrich reflected. “I wasn’t sure I could find a hole to get too but once everybody got single file I could pick and choose.”
Dietrich pulled away with a clear track in front of him and entered lapped traffic by the seventh lap.
Seventh-starting Brian Montieth had started to work his way to the front and passed Krimes for third in lapped traffic on the ninth lap.

“You’ve got to race pretty good through the feature to hold off the other guys that are fast up front,” said Dietrich. “I think it puts on a good show for everybody…that’s what is great about this format.”
“You get rewarded. But everybody is getting rewarded.”

At the halfway mark Tyler Ross encountered problems exiting the fourth turn, eventually flipping in the second turn to bring out the red flag with 12 laps officially in the books. Ross was okay.
So with 13 laps to go, Dietrich once again had a clear track ahead of him, with Rahmer, Montieth, and Krimes right behind.

And just as before, Dietrich controlled the restart and put daylight between himself and the field as they entered lapped traffic again with eight laps to go. Montieth and Rahmer began battling for the runner-up spot with two laps to go, giving Dietrich some breathing room the final laps and took the checkered .93-seconds ahead for his third overall win of 2018.

“I like the time trial shows,” said Dietrich on his plans moving forward in 2018. “I like the shows that are rewarding for the heat races…we’re going to bounce around like today where we changed where we were going, this is going to happen a little more often.

“We’re going to Mansfield (OH) next weekend, but if Friday don’t go well, we’ll probably see you again next Saturday. We hope to be there for the big dance on Saturday (Mansfield Motor Speedway for the $100,000-to-win Sprint Car World Championship).

Rahmer held off Montieth in the battle for second, with Montieth settling for third, Krimes fourth, and ninth-starting Jim Siegel fifth.

Heats for the 22 410 Sprinters on hand were won by Forsythe, Dietrich, and Rahmer. 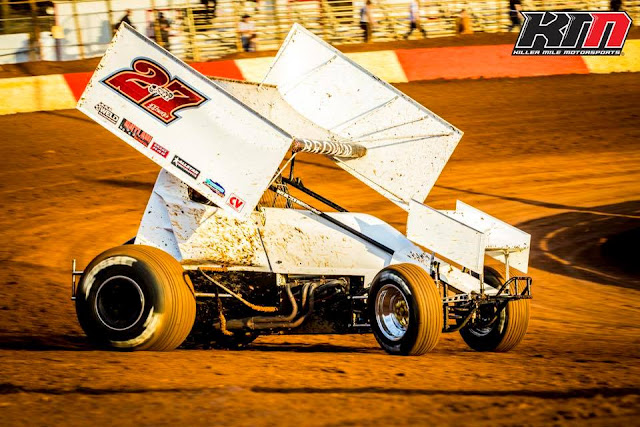 Brown followed polesitter Dalton Dietrich from his outside front row starting spot at the drop of the green of the 20-lap feature.

Brown slipped by Dietrich for the lead on the seventh lap and then held off Friday night Trail-Way Speedway winner Cody Fletcher in a one-lap dash to the checkered to register his inaugural 358 sprint victory.

Heats for the 22 358 Sprinters on hand were won by Halligan, Dylan Norris, and Brent Shearer.
Shaun Jones grabbed the lead from his pole starting position at the drop of the green of the 358 Late Model feature and drove non-stop for 5 minutes 57.58 seconds to take the checkered for the 2.47-second win over third starting Randy Christine, Jr.

Heats for the 21 358 Late Models on hand were won by Bonebrake, Christine, and Sagi.
Lincoln Speedway is back in action next Saturday night, April 28st, with the running of the 15TH ANNUAL WELDON STERNER MEMORIAL for 410 Sprints (33 Laps/$6,900 to win), plus 358 Sprints and Street Stocks. Gates will open at 5:30 PM, with hot laps getting underway at 7 PM, and time trials starting at 7:30 PM.