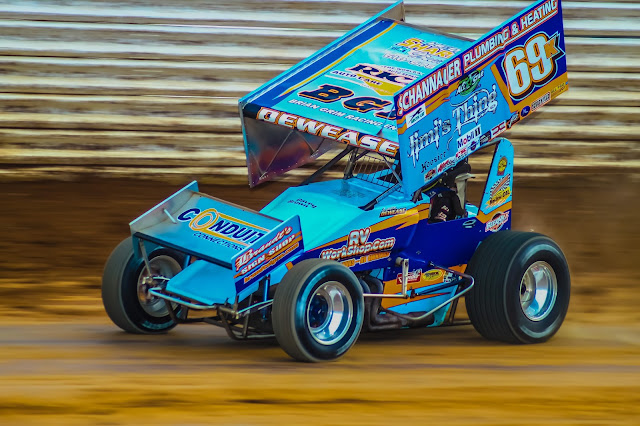 PORT ROYAL, Pa. –Lance Dewease of Fayetteville made it back-to-back victories in the Port Royal Speedway Keith Kauffman Classic for the All Stars Sprint Cars on Saturday night, scoring $5,000 for the victory over the touring invaders.

For Dewease, at the wheel of the Kreitz No. 69K, the win marked his fifth in a row in All Star competition at Port Royal, dating back to September 10, 2016.

The win was also the 37th of Dewease’s career while racing with the All Stars as a series, tying him with Steve Kinser, Doug Wolfgang and Danny Lasoski on the All Stars all time win list.

Also at the track on Saturday night, in the 25-lap 2018 kickoff of the Moon Shine Camo Rt. 35 Dirt Late Model Challenge Series, Jeff Rine of Danville dominated to pick up the $2,200 payday which was his second of the year at the track.

The initial start of the 30-lap Kauffman Classic for sprint cars was red flagged when Dave Blaney spun in the third turn, collecting TJ Stutts, who flipped.

Prior to the stoppage, polesitter Steve Buckwalter had taken the lead.

On the ensuring restart, second starter Anthony Macri got the best of Buckwalter and took control.

Macri entered the backmarkers on the seventh tour with Buckwalter, Aaron Reutzel, Greg Hodnett and Dewease in tow.

Reutzel was blasting the top around the speedway and motored into second with nine away at the same time as Dewease began advancing, taking fourth from Hodnett on the 10th circuit.

A lap later and Dewease was up to third while Reutzel worked on Macri for the lead, which he took by .02 seconds at the line as the pair drag raced to the line on the 12th lap.

And then just as Dewease was along side Macri for second working on lap 13, Trey Starks came up with a flat right rear tire in the first turn, causing the caution flag to unfurl.

Reutzel blasted away on the restart as Dewease again worked on Macri for second but before he could get the spot, Dave Blaney spun in the first turn, forcing another yellow flag that turned red for refueling.

The stoppage and a chance to work on the car was all that Dewease’s team needed as he motored by Macri for second at the new green before giving chase of Reutzel.

Around the high side went Reutzel lap after lap as Dewease chugged the low line and worked his way up on to the leader with 10 laps to go.


With nine laps remaining, Dewease blasted the low line into the third turn and came up off of the fourth corner with the lead.

However Reutzel stayed close enough as the leaders worked traffic to be sure and keep Dewease honest to the finish.

The winning margin was 2.149 seconds for Dewease.

“If it wasn’t for the red, Aaron was gonna’ win that race,” said Dewease in victory lane.

“He was the best car at that point.”

Heats for the 47 cars in action went to Hodnett, Cale Conley, Cisney, Wagner and Starks.

Twin dashes went to Buckwalter and Macri with Cole Duncan taking the C Main and Logan Wagner taking the B Main.

Rine drew the second spot to start the Moon Shine Camo Rt. 35 Series main event and would lead all 25 laps of the event.

Only one caution flag, on the 10th tour, slowed his pace when Meade Hahn spun in the first corner.

Polesitter Gene Knaub chased Rine until lap 12 when Andy Haus got by for second.

Haus was unable to close on the leader however as Rine went on to post a 3.978 second victory.

The win was his 20th at the oval, tying him with Jim Nave on the oval all time late model win list.

Heats went to Feree, Brenneman and Rine with 29 cars in action.