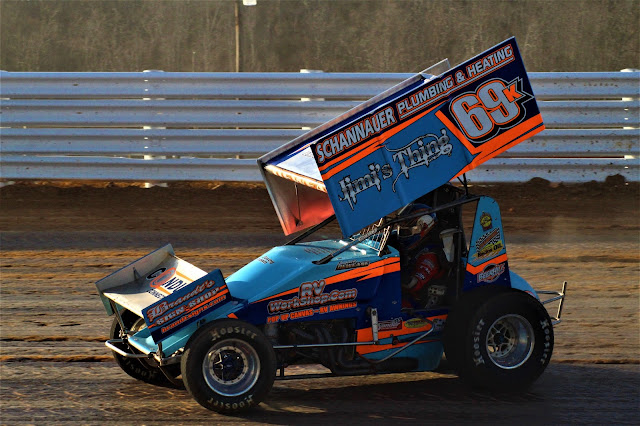 PORT ROYAL, Pa. – Lance Dewease of Fayetteville scored the 2018 season opener for 410 sprint cars at Port Royal Speedway on Saturday night, taking the lead from Jason Shultz to record the $4,000 victory which was the 107th of his career at the Juniata County oval.

Jeff Rine of Danville proved victorious in the super late model main to record his 19th career win at the oval. Rine took home $2,200 for the win.

In the Mason Dixon Shootout Series feature for limited late models, Justin Weaver took the lead from Tim Fedder to pick up the $1,000 payday and defending track champion Bill Powell scored the win in the xtreme stock main to close out the night.

Just over 100 total racecars packed the Port Royal pits for the show.

Shultz and Dewease earned the front row for the 25-lap sprint car main with the first start aborted when Mark Smith spun in the third turn, collecting Jared Esh and Vince Snyder.

Dewease had gotten the upper hand on that initial start but the next try saw Shultz keep his rear wheels underneath his mount and take the lead over Dewease.

Shultz could only outlast Dewease’s 69K for two laps however before Dewease drove to his inside in the first and second turns to take control on the third lap.

Meanwhile, sixth starter Dylan Cisney was blasting around the speedway and drove into third on the fifth tour as Dewease hit traffic with seven away.

Cisney had driven down Shultz and Dewease to be in a challenging position when the caution flag unfurled with 11 laps completed.

However after the restart Cisney failed to be able to mount a bid and instead Dewease went uncontested to the victory, which was his third career Port Royal opening day checkers.

Finishing second, 2.5 seconds behind was Shultz with Mike Wagner getting third followed by Greg Hodnett and Cisney who faded later in the event.

Heats for the 27 sprint cars went to Cisney, Hodnett and Bowser with TJ Stutts taking the consolation.

Rine started on the pole of the 22-lap super late model main and led every lap for the win.

His pace was slowed thanks to cautions on the fifth, eighth and ninth laps but no one could mount a challenge for the win.

Rine drove to the checkers with a 2.6 second margin over Frye, followed by Haus, Trent Brenneman and Tim Smith Jr.

Heats for the 26 cars went to Rine, Haus and Stickley with the consolation going to Tyler Bare.

It took Fedder only six laps to circle outside for the lead however 13th starter Justin Weaver proved fleet as well and made his presence known by the halfway point.

Weaver took command from Fedder with just five laps to go to run to the win.

Jeremy Ohl got by Fedder in the final two laps to finish second with Fedder ending up third followed by Farling and Devin Frey.

Bill Powell led all 15 laps of the xtreme stock feature with Whelan Brunson racing up to second by the finish from the 11th starting spot.

The Only Place To See Super Sprints And Super Lates Every Saturday Night
www.portroyalspeedway.com
Posted by Bill McIntyre at Sunday, April 01, 2018