Dietrich earns win at BAPS Motor Speedway; Three nights with the All Stars ahead 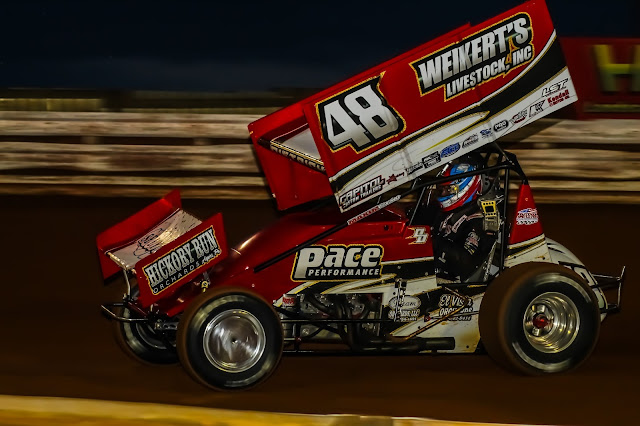 The victory, his second of the 2018 season and his first at the venue formerly known as Susquehanna Speedway, occurred in fantastic fashion, working ahead from sixth on the main event grid to eventually drive around tenth starting Lance Dewease on lap 17.

Dietrich earned his third row starting position by way of feature redraw, qualifying for the evening’s draw after finishing second during his respective heat race.

“Things are starting to click now,” Danny Dietrich explained, pilot of the Gary Kauffman Racing/Weikert’s Livestock/Sandoe’s Fruit Market/Pace Performance/Gsell’s Whitetails/Hickory Run Orchards/Drop Of Ink Tattoo/Sweeney Cars/Self Made/No. 48 sprinter. “We were working on things all weekend, but I think we finally fixed what was wrong. Lance (Dewease) was good at the start of that race, but it’s 30 laps. You have to be strong the entire distance and we proved we were still good at the end. Hopefully we can put our notes to good use this weekend when the All Stars come to town.”

Before earning the victory at BAPS Motor Speedway, the Gettysburg native launched his three-race weekend in the Keystone State with a pair of seventh place performances at Williams Grove Speedway and Port Royal Speedway on Friday and Saturday, April 6-7. Dietrich’s trio of top-ten finishes increased his season total to nine.

Up next, Danny Dietrich and Gary Kauffman Racing will join the Arctic Cat All Star Circuit of Champions presented by Mobil 1 for three consecutive programs in Central Pennsylvania on Friday through Sunday, April 13-15. Dietrich will join America’s Series at Williams Grove Speedway on Friday, Port Royal Speedway on Saturday, and Bedford Fairgrounds Speedway on Sunday, each awarding a $5,000 top prize.

“It should be a good weekend. We like to stay busy like this,” Danny Dietrich continued. “The more we get to race, the more of a rhythm we get to build. I just can’t thank my guys enough for their hard work and dedication. From this point forward, it doesn’t get any easier. I appreciate what they do for this team.”

2018 Highlights: Earned three top-ten finishes against the Arctic Cat All Star Circuit of Champions presented by Mobil 1 during trip to Florida in early February, all highlighted with a seventh place finish at Volusia (Fla.) Speedway Park. Earned win at Lincoln Speedway on 3/10 worth $3,500. Finished second at Lincoln Speedway during Sprint Spring Championship ($5,000). Earned pair of seventh place finishes at Williams Grove Speedway and Port Royal Speedway on April 6-7. Picked up second win of 2018 at BAPS Motor Speedway on Sunday, April 8.