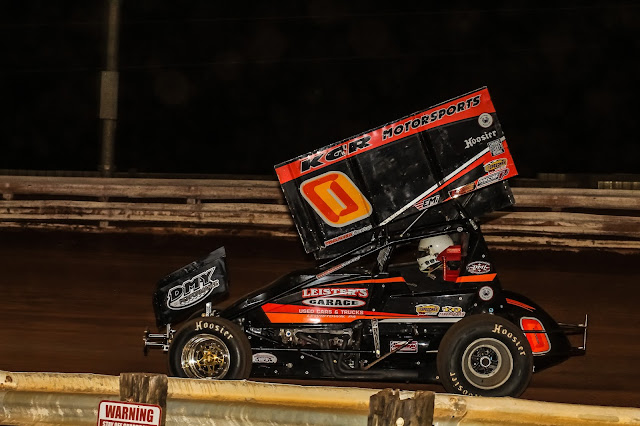 The 2018 racing season for the Laurel Highlands Sprint Car Series has finally begun and race number one is in the books. A HUGE thank you goes out to all the sprint car teams who took part in last night's lid lifter at the Fabulous Bedford Speedway.

Our largest Friday night car count of 17 sprinters were on hand on a very cold evening. Congratulations go out to Kyle Ganoe on taking the 20 lap feature, his first Laurel Highlands main event at Bedford. Several drivers made their first Bedford appearances with the LHSS Jimmy White, Donnie Hendershot and Rookie Eric Husick. Many drivers also sported new and different paint schemes which added to the excitement of a new season. Second year drivers Matt Kline, Ray Sheetz, Bob Garvey, Jr. and Jim Kosnosky continue to get more comfortable behind the wheel and eventually all will be contenders.

As it usually does bad luck hit a few teams, Jonathon Jones who was to start on the pole for his heat race experienced some engine issues and went into the pits before the green flag but returned for the feature, Jim Kosnosky was unable to answer the call for the feature due to an oil leak at the harmonic balancer, Jimmy White experienced problems in his heat and dropped out, his crew worked hard to get the car ready for the feature but reluctantly had to scratch, also Randy Sterling had some misfortune during the feature when he tangled with Matt Kline of lap 8 sending both cars to the pits ending their night.

Overall the racing for the sprint cars was great especially for Kyle Ganoe who was dialed in taking his heat race and leading the entire feature with Ryan Lynn looking great winning his heat and staying with the fast Thompsontown driver. Scott Lutz, defending Summer Showdown Champion, looked strong all night and challenged Lynn several times for the runnerup slot.

Also Drew Ritchey who is always tough at Bedford was in the hunt all race long as was the Lewistown Wolverine, Ron Aurand who loves Bedford. Others who had good runs in the main event were Reed Thompson who is always consistent at the big track, also Cowboy Jim Kennedy looked strong all night as did Brad Mellott who was sporting a new paint scheme on his mount. Cracking the top ten were Bob Garvey, Jr. and Ray Sheetz while Donnie Hendershot was in the hunt with a fine first time run at Bedford. Again a huge thank you to the 17 sprint car teams for their support as well as the loyal fans who braved a very cold night and also to promoter Joe Padula for going on with the show.

Our next Bedford appearance will be over the Memorial Day weekend on Sunday May 27th. Here are the race results for the heats and the feature.