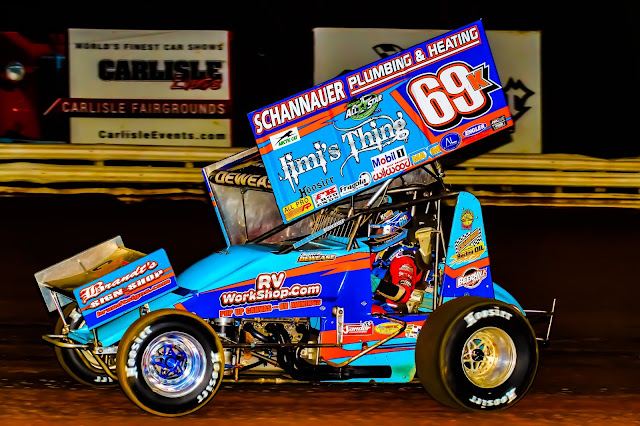 For Dewease, of Fayetteville, his 88th career Grove win was worth $5,000 and it came against Tony Stewart’s All Star Circuit of Champions.

“We could put the car anywhere on the race track,” Dewease said. “We were really good in our heat race, but couldn’t show it. I’m fortunate to be involved with this deal. We’re having fun. That’s what it’s all about. They work hard at this.”

Brock Zearfoss started on the pole and took the lead on the opening lap of the 30-lap main event over six-time All Star Champion Chad Kemenah, who started second, and fourth starter Danny Dietrich.

Also closing was Dewease as he took fourth from Chad Trout. Dietrich drove under Kemenah in turn two taking over second in lapped traffic. Zearfoss had one lapped car between himself and Dietrich. Dewease drove by Kemenah and into third by the half-way point.

Zearfoss worked the cushion as Dietrich and Dewease were on the bottom behind a lapped car. Dewease tried the top in turn one, but couldn’t make the pass.
Dietrich went high in turn three to maintain the spot. They continued their battle for second for another lap racing close. Dietrich slipped high in turn two and Dewease drove by with 10 laps to go.

Zearfoss was racing the bottom now in lapped traffic with Dewease closing. Dewease used the middle groove to pass a slower car and was under Zearfoss in turn four, but Zearfoss led the lap. Dewease made the winning pass in turn two on lap 24.

“I didn’t even know I was leading,” Dewease said. “I was trying to pass every car I got to as quick as possible. They gave me the five to go and I was leading and I knew I had to slow down because I knew there wasn’t much rubber left on these tires.”

Dewease was in control, but the caution flew with two laps to go when Alan Krimes stopped in turn four. The caution flew again on the restart for Tim Shaffer. 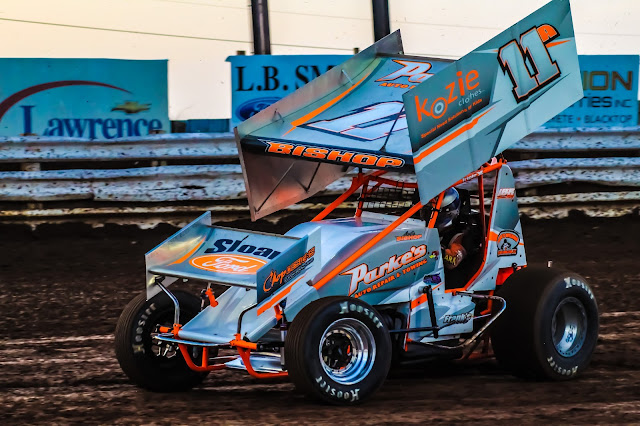 Bishop held a comfortable lead over Ritchey and Duke Jr. as they reached the half-way point and slower traffic.

Bishop got through traffic without much trouble scoring the win over Ritchey, Duke Jr., Zach Newlin and Darren Miller. The non-stop time was 7:15.72. Dave Grube, Scott Lutz, Jaremi Hanson, Kyle Smith and Kyle Ganoe rounded out the top 10.