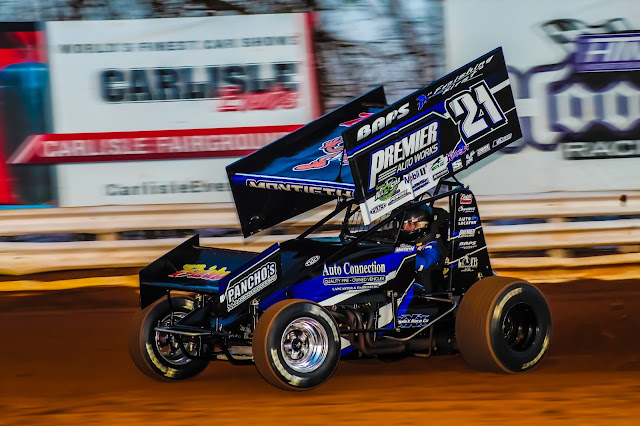 Mechanicsburg – “The Edge,” Brian Montieth returned to Williams Grove Speedway victory lane on Friday night for the first time since August of 2016, scoring a popular win in the 410 sprint car main.

In the 358 sprint feature, Kevin Nouse pounced on a restart with two laps to go to steal the win from Jeff Halligan.

Steve Buckwalter started on the pole of the feature flanked by Brandon Rahmer with Montieth lining up third and Buckwalter took the lead over a close Rahmer on the start.

From the get-go, Rahmer was forced to deal with a challenging Montieth as Buckwalter set the pace.

Montieth had Rahmer passed twice during the third and fourth laps only to watch as Rahmer drove back by him to reclaim the second spot.

The trio of leaders entered the backmarkers on the eighth lap with Rahmer having gotten away from Montieth just enough to be challenging Buckwalter for control with 10 in the books.

But just that quick, Montieth again caught up to Rahmer and blasted to his inside for second on the 11th tour.

Buckwalter was pounding the high cushion as the leader with both Rahmer and Montieth bearing down for control, darting in and out of traffic when one simple bobble on the cushion cost him the lead on the 13th tour.

As Buckwalter set the car into the third corner, it pitched sideways off of the cushion and came down across the track as Montieth zoomed by along with Rahmer who ended up just squeezing between Buckwalter’s faltering mount and the inside rail in the fourth turn.

Montieth then went to work threading his way around the big half-mile with Rahmer in tow.

At the end, Montieth took the 24th win of his career at the track by 3.755 seconds over Rahmer with Buckwalter, Freddie Rahmer and TJ Stutts completing the top five. 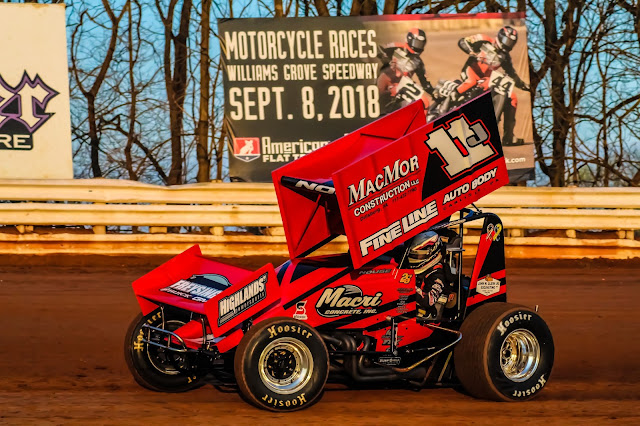 Jeff Halligan took the lead from Chris Frank on the second lap of the 20-lap 358 sprint main and had point leaeder Kevin Nouse on his trail in second on the fourth circuit.

Nouse and Halligan then raced the next 14 laps challenging each other for the win as Knouse pulled even with Halligan to his inside more than once only to watch as Halligan clawed back into control.

Halligan changed lanes at will around the oval as he fought to hold onto the lead, keeping Nouse guessing in every turn while also working the backmarkers.

Through it all, Halligan was able to maintain his advantage over Nouse until a lone caution flag unfurled with two laps go to and that proved to be Halligan’s undoing.

The pacesetter set a slow gait back to the green flag and that allowed Nouse to climb all over him for the lead as the pair entered the first corner.

Nouse pushed his No. 11 to Halligan’s inside as the pair blasted into the turn and then drove off for the victory, his second of the season at the track and the 19th of is oval career.