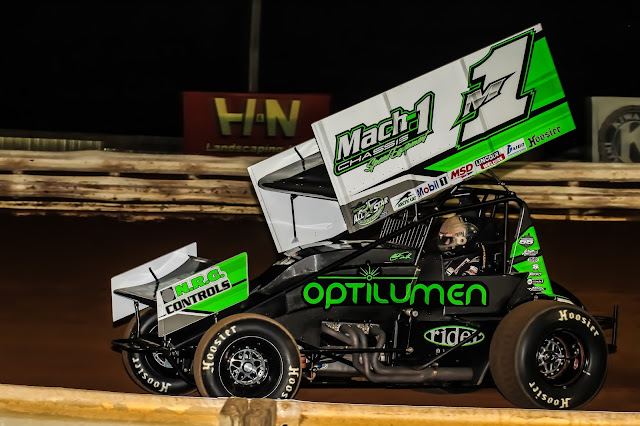 For Smith, driving the Mach 1 Chassis/Optilumen No. 1M, the $4,088 win was his first of the season in central Pennsylvania and fourth overall.  He was the fifth different driver to receive the custom crystal cup trophy presented by the Tilley family for winning the tribute race honoring the memory of the speedway’s former four-time sprint car champion.

The win was Smith’s first in a 410 sprint car at Selinsgrove since 2003. He holds the distinction as the only driver to have won in four different classes of open wheel cars at the track, including super sportsman, 358 sprint cars, 360 sprint cars, and 410 sprint cars.

Kyle Bachman of Selinsgrove inherited the lead from opening night winner Tommy Slanker of York and went on to win the 15-lap pro stock main event.

Keith Bissinger of Orangeville scored his first win of the season in the 12-lap roadrunner feature by holding off last week’s winner Ryan Zook of Mifflintown.

Selinsgrove Speedway is back in action at 7 p.m. this Saturday, April 28, with the 360 sprint cars, super late models, pro stocks in the A&A Auto Stores Pro Stock 20, and roadrunners. Pit gates will open at 4 p.m. with grandstand gates at 5 p.m.

Polesitter Gerard McIntyre pulled into the lead at the start of the 410 sprint car feature and was chased by second-place starter TJ Stutts until third-place starter Steve Buckwalter advanced to second entering turn three.

On lap four, Buckwalter’s car blew a tire on the frontstretch, causing the Royersford driver to get sideways in turn one. When his car rolled over it was struck by Jason Shultz’s sprinter. Both drivers escaped injury.

When the race resumed on lap five, McIntyre held a solid lead over fifth-place starter Mark Smith, Stutts, and fourth-place starter Freddie Rahmer. The race was slowed again on lap 10 when Blane Heimbach’s car rolled to a stop on the backstretch with a flat tire. Heimbach rejoined the field.

Smith made the winning pass using the inside lane entering turn one on the lap 11 restart. A lap later Rahmer moved into second after getting by McIntyre in turn 3. On the 14th lap, Heimbach’s car stopped on the frontstretch with mechanical issues.

At the halfway point, an intense multi-car battle unfolded for positions in the top five between Stutts, Hodnett, McIntyre, and 12th place starter Brock Zearfoss. When Zearfoss drove to the outside in turns three and four his car got sideways and struck the outside guardrail, ending his drive to the front and chances of a three-win weekend.

The final 10 laps saw Smith set the pace in front of Rahmer, Stutts, Hodnett and ninth-place starter Lucas Wolfe. In the closing laps, the leaders began to encounter slower traffic, allowing Rahmer to reel in Smith. At the checkered flag, Smith was victorious by .51 of a second in a close finish with Rahmer. Stutts, Hodnett, and Wolfe rounded out the top five.

With two laps remaining, third-place starter Kyle Bachman made an inside pass by Hoffman on the frontstretch to take the lead. Bachman went on to win the race by just .57 of a second over Moser, Slanker, Andrew Shoop, and Shaun Lawton.

Defending co-champion Will Brunson started on the pole in the roadrunner feature and held off co-champion and sixth-place starter Keith Bissinger for the first five laps before Bissinger took command of the field during a three-wide race in turn two on the sixth circuit.

While Bissinger set the pace, third-place starter Ryan Zook and Brunson remained in striking distance. At the checkered flag, Bissinger was victorious by the slimmest of margins over Zook, Brunson, Smith Cope, and Jake Jones.