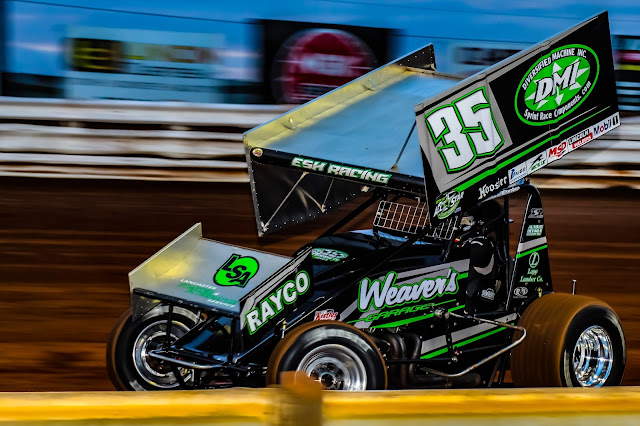 Picking up a first-time win anywhere is special. For Esh, to pick up his inaugural win was even more special when considering he had six-time Lincoln Champ, and two-time 2018 winner Brian Montieth chasing him in a three-lap shootout to the checkers.

“With three (laps) to go I never prayed so hard in a race car in all my life,” said Esh following his first-ever wing-dance for winning the feature. “Just three more laps was all I needed…I saw him trying to come underneath me the last three laps and I was just hoping not to make a mistake and pull back around him every time and it worked out.”

And work out it did.

Esh started on the pole and grabbed the lead at the drop of the green with third-starting Glenndon Forsythe and outside frontrow starter Scott Fisher following. Friday night Williams Grove winner Cory Haas came charging from his sixth starting spot to grab third on the second lap and eventually got by Forsythe for the runner-up spot on the 13th lap.

As the non-stop laps wound down in the 25-lap feature ninth-starting Montieth and seventh-starting Freddie Rahmer were methodically working there way to the front as Esh cruised out it front, just out of reach of the back of the field.

Montieth started gaining on the leaders and moved around Forsythe for third on the 18th lap and then by Haas for the runner-up spot with five laps to go.

Just as it looked like Esh had the checkered in sight in the non-stop affair, disaster struck on the 23rd lap as Forsythe and Gerard McIntyre, Jr. tangled in turn two to bring out the caution.
“I really didn’t look at the leader board until the caution came out with three (laps) to go,” said Esh. “I was starting to catch lapped traffic and trying not to make a mistake. When I saw (Montieth) on the board I didn’t know what to do other than to not mess up and hope for the best.”

This set up a dramatic three-lap dash to the checkered with Esh being chased by Montieth (who had won the last two races at Lincoln), Haas, and Rahmer.

“When I seen the No.21 (Montieth) on the board I knew he could run top end on me so I figured as long as I didn’t mess up I was either going to win it or put it into the fence trying.”
Rahmer got by Haas for third on the restart with Esh now staring at Montieth and Rahmer chasing him with a clear track ahead and only two laps to go.

“I know we haven’t went out of here on four wheel too much, but this definitely feels good. I can’t thank my mom, Sue, and dad, Sam, and my brother Travis enough. And my wife Jessica for sticking behind me and letting me come back after getting hurt. My wife just lost her grandmother so I hope she was riding with me and helped us get here.”

Montieth started to show himself on the inside of each turn with Esh holding steady in his high line around each time. In the final turns to the checkered Montieth appeared to pull even on the inside but the Lancaster racer held steady and drove away on the exit of the turn to take the checkered for his first career 410 sprint win.

“I feel like I’m getting more-and-more comfortable (in the car). We had some bugs there the last couple of weeks. We just had to work through it. We’ll just give it all we got and keep going and keep this momentum going.”

“You’ve got to take advantage of your starting position and not make any mistakes. I owe this to everyone who helps me out Kevin Quirk from Racewear, Chad Baker from RRI Designs, Diversified Machine, RAYCO, my mom and dad, my brother.”

Heats for the 17 410 Sprinters on hand were won by Esh and Fisher.

Manheim’s Brent Shearer started his No.12 sprinter on the pole and led forth-starting No.12B of Mike Bittinger all 20 laps en route to his first win of 2018, and the third of his career in the 358 sprint feature.

Shearer withstood a pair of cautions, one on the fourth lap for a slowing Greg Plank (who started outside Shearer on the frontrow), and another on the 12th lap for a spinning Cody Fletcher and Kenny Kuhn. Each time Shearer held off Bittinger and Troy Wagaman, Jr. (who started sixth) and raced away to a comfortable 2.53-second victory.

Heats for the 19 358 Sprinters on hand were won by Dietz and Norris.

Bob Gutshall kicked off the super sportsman season with a win in the special 20-lap wingless super sportsman feature. Gutshall took the lead from his pole-starting position and held off veteran racer Billy Brian, Jr. to claim the victory by 1.41-seconds.

Heats for the 15 Wingless Super Sportsman were won by Joey Biassi and Gutshall.
Lincoln Speedway is back in action next Saturday night, April 14th at 7 PM, with the 410 Sprints and 358 Sprints being joined by the street stocks. Gates will open at 5 PM, with hot laps getting underway at 6:30 PM, and heats at 7 PM.