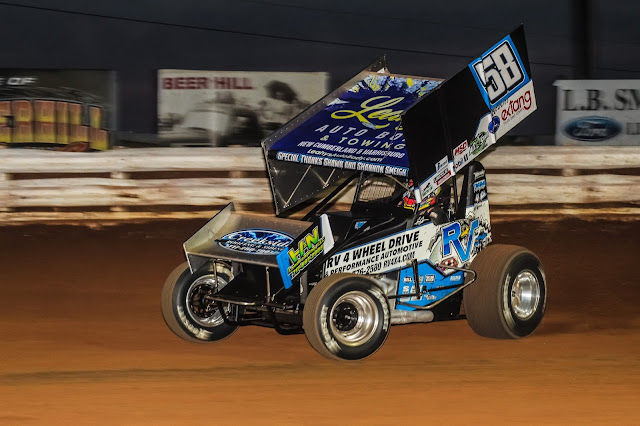 Meanwhile, in the first ASCS race ever held at the famed speedway, it was five-time Grove track champion Greg Hodnett starting on the pole and leading all 25 laps in night number one of the “Battle of the Groves.”

In the 410 feature, Anthony Marci started second and drove into the lead over Chad Trout and Ott, who advanced from his sixth starting spot in the opening lap.

Dietrich was quickly moving forward on a tricky racing surface from his 10th starting spot. He was
into the top five by the third lap. Another pass moved Dietrich to fourth as the leaders reached lapped traffic.

With Macri in control, Ott drove by Trout and into second with 10 laps completed. Macri’s lead was around a second as they reached the half-way point.

Macri scraped the fence as he tried to lap a car. Ott drove by and into the lead. Macri’s great run came to an end with 14 laps completed when he stopped in turn four with a flat right rear tire.

“I was reeling him in,” Ott said. “He was running around the top. He was in the predicament that I was at the end of the race. You just don’t know where to go. If you’re not searching and moving around, you’re going to lose these races because there are too many good cars and too many good drivers here.”

“He might have had a tire going down. I crowded him off two, but I figured that was my only chance. I don’t know if he got sucked into the fence and that ultimately cut his tire. He’s been doing a tremendous job. We had a new car tonight and changed some things and I think we’re on to something. Circumstances certainly played in our favor.”

Ott controlled the restart. Dietrich blasted under Trout as they raced into turn three taking second with
seven laps to go.

Ott reached slower cars with a few laps left allowing Dietrich to close. Dietrich drove as hard as he could trying the outside line, but fell a few car lengths short at the checkers.

“I could hear him out there,” Ott said. “I was just biding my time. I wasn’t really sure where to go in three and four. I was pretty good in one and two. At that point, it was my race to lose. Everybody knows Danny is going to do everything he can to put a show on and get the job done.”

In the ASCS feature, Greg Hodnett scored the most passing points during qualifying earning himself the pole.

Hodnett had a comfortable 1.210 second lead when he reached slower traffic with 10 laps completed. A caution flag then slowed the field.

Buckwalter briefly challenged Smith for second following the restart, but didn’t make the pass as Hodnett pulled away again.

A caution slowed the field again with 12 completed.

Hodnett once again controlled the restart and drove away. Lucas Wolfe battled Johnson for the fifth spot and then Chad Layton moved in on Wolfe.

Hodnett stretched his lead to 1.709 seconds as Wolfe made the pass of Johnson. Wolfe’s run came to an end when the inside wing panel of his sprinter came off.

Hodnett led the final laps scoring the win by 1.082.

“Anytime we can win is monumental at this point,” Hodnett said. “We’ve been struggling. These guys are the best in the business in this type of racing. We got lucky enough to start up front and take advantage of it. Everything went our way.”