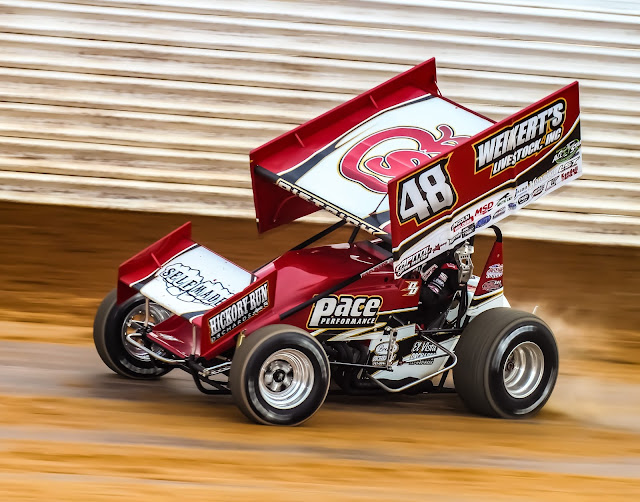 PORT ROYAL, Pa. – Danny Dietrich bested TJ Stutts to claim his fourth career Port Royal Speedway 410 sprint car win on Saturday night worth $3,600, but his first under the lights at the historic track as all three of his previous wins had taken place under the Labor Day sunshine.


In the 22-lap super late model main, Dylan Yoder of Selinsgrove overtook Tim Smith Jr. for his second victory of the season at the track, worth $2,000.


Stutts and Dietrich earned the front row for the start of the 25-lap sprint car main and the pair immediately did battle when action began.


Dietrich passed Stutts a total three times during the first two laps before he could make it stick coming out of turn four to complete the second lap.


The pair exchanged the top spot on the opening lap in the first and second turns and again in turns three and four before a low swoop through three and four on the second tour netted him control.


Dietrich then went to the cushion to begin putting daylight between himself and the rest of the field, entering traffic on lap 10.


While Dietrich held sway well out in front, the race was hectic for second through fifth between Stutts, Mike Wagner, Logan Wagner and Greg Hodnett.


Both Wagners raced hard for third for several laps, exchanging the spot several times with Stutts just in front before Logan stepped up to the plate and took third long enough to begin challenging for second during the final laps.


Aboard the Zemco No. 1, Logan Wagner passed Stutts for second on laps 19 and 21 only to see Stutts change lanes and reclaim the spot, where he would finish albeit 3.280 seconds behind Dietrich.

Logan Wagner earned his second podium finish of the season in third while Mike Wagner was fourth with Hodnett finishing fifth.


The super late model main went non-stop as well with Tim Smith Jr. and Trent Brenneman starting on the front row of the main.


Dylan Yoder started fourth in the field and drove into second on the opening lap behind Smith.


Yoder encircled the track running higher than Smith and consistently cut down his advantage during the first half of the race before overtaking the Long Hollow driver at the halfway point.


And once in front, Yoder cruised to the victory by 2.353 seconds over Smith, Mike Lupfer, Jeff Rine and Brenneman.


Heats went to Stone and Brenneman.


The win was the 14th of Yoder’s career at Port Royal.


The 305 sprint main was underway with six laps completed when a persistent light rain got heavy enough to knock out the rest of the night’s action.


With Zach Newlin leading, the balance of the 305 sprint main will be completed when the circuit returns to the track on June 30.


The econo late model main that was stymied by the rains will be run next week, May 12 when the econos return for another full program of action.


Immediately upon the completion of qualifying on Saturday, the light rains began falling, forcing a delay in getting the 410 sprint main started however after some 30 minutes of the sprinkles the cars were put on the track and both the 410 sprint and super late model mains were able to be completed amid the continuing light showers.