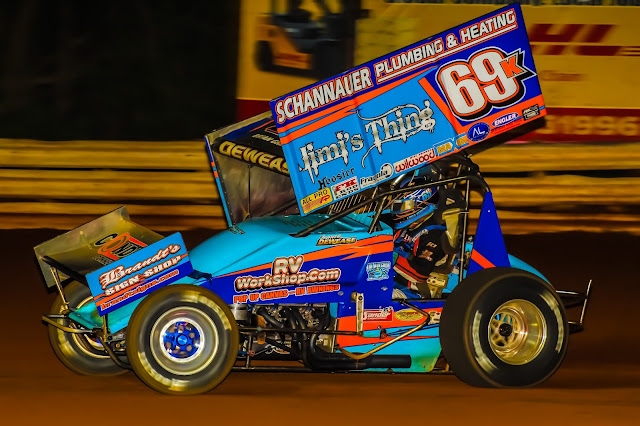 Mechanicsburg – Lance Dewease of Fayetteville rocketed to his 89th career Williams Grove Speedway sprint car win on Friday night, worth $4,000 in what was a tune up for the regulars as they prepare for next week’s invasion by the World of Outlaws.

The victory put Dewease just one back of tying Fred Rahmer for the most sprint car wins in history at the oval.

Steve Buckwalter and Dewease earned the pole for the 25-lap main event and Buckwalter beat Dewease off of the blocks when the green flag fell over the field.

However only one lap could be scored before Rodney Westhafer stopped on the track, slowing the pace.

The restart turned to a red flag when TJ Dehaven hopped a wheel in the first turn and flipped outside the track.

Buckwalter of Royersford got away from Dewease when action resumed but it only took a few laps for Dewease to get his No. 69K clicking and he began biting into Buckwalter’s advantage by lap seven.

For three consecutive laps Dewease drove down considerable chunks of the lead and as the pair crossed the stripe to complete lap nine, they were nose to tail.

A low swoop through the first and second turns just moments later netted Dewease the lead as he bit fast off of the inside of the second turn to blast into control.

And from there he worked traffic with ease, slicing through the field to have a full straightaway advantage over the field by lap 17.

With Dewease out front, Lucas Wolfe took second shortly after the halfway point and then he and Danny Dietrich battled for the spot late in the race.

Another yellow flag with four laps to go wiped out Dewease’s 4.3 second margin and on the restart Wolfe buzzed the top in the first and second turns in an effort to steal the win but Dewease’s low line was his money lane as he pulled away off of the second turn.

The battle for second between Wolfe and Dietrich then continued with Dietrich gaining the spot on lap 23 before a final caution flag with a lap to go again bunched the field.

Wolfe again buzzed the turns one and two top lane trying to regain second but Dietrich prevailed at the finish for second.

Dewease’s margin of victory was 1.157 seconds. It was his second oval win of the season.

Buckwalter finished fourth in the feature with James McFadden crossing the line in fifth.

The 20-lap 358 sprint main was under caution on lap four when rains hit the track, forcing postponement of the balance of the feature.

A date to complete the event will be announced in the near future.

Keller was leading the feature over Rittenhouse when the rains began to fall.