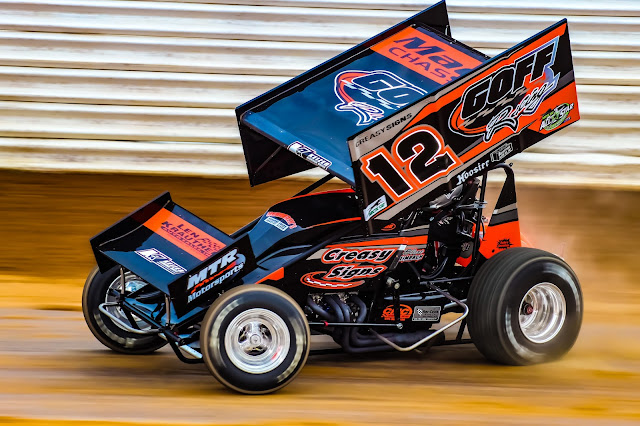 SELINSGROVE, Pa. – Selinsgrove’s Blane Heimbach returned to the track where he got his sprint car racing career started as a teenager and scored a popular victory in the inaugural Lucas Oil American Sprint Car Series Eleven Oaks Farm/Mach 1 Chassis Battle of the Groves Saturday night at Selinsgrove Speedway.

The win in the 25-lap 360 sprint car feature was worth $5,500 for Heimbach, including $1,500 in bonus money from Mach 1 Chassis in Mechanicsburg, at the wheel of the Creasy Signs/Goff Racing No. 12. It was the former three-time champion’s 37th career win in 358-360 sprint car competition at the track.

A stellar field of 41 360 sprint car drivers representing various parts of the United States and Canada as part of the Lucas Oil ASCS National Tour and in conjunction with the United Racing Club was on hand and completed the open wheel portion of the show in just two hours with impending inclement weather.

The race was Night 2 of the Battle of the Groves weekend with Greg Hodnett of York taking the win in Friday’s race at Williams Grove Speedway in Mechanicsburg.

The 20-lap limited late model and 15-lap pro stock features were postponed due to rain that hit the speedway about 9:30 p.m. Track officials will announce the rescheduled dates for those events.

Front row starter Blane Heimbach took the early lead at the start of the sprint car feature using the high line around turns one and two. On the second circuit, fourth-place starter Trey Starks passed polesitter Seth Bergman for second and set his sights on Heimbach.

When the race resumed, Heimbach stormed around the top of the race track as seventh-place starter Mark Smith began to show some speed and moved into the fourth position on lap five. Davie Franek, who started tenth, entered the top five on the eighth circuit.

At the halfway point, Heimbach began to encounter slower traffic. With 10 laps to race, Franek powered into fourth and quickly caught Bergman in a race for third. In the final five laps, Starks cleared the slower traffic and made a last-ditch effort to reel in Heimbach but came up 1.96 seconds short at the checkered flag. Franek, Smith and Bergman rounded out the top five.

Within minutes after the checkered flag fell, heavier rain began to fall on the speedway, forcing the postponed of the limited late model and pro stock features.