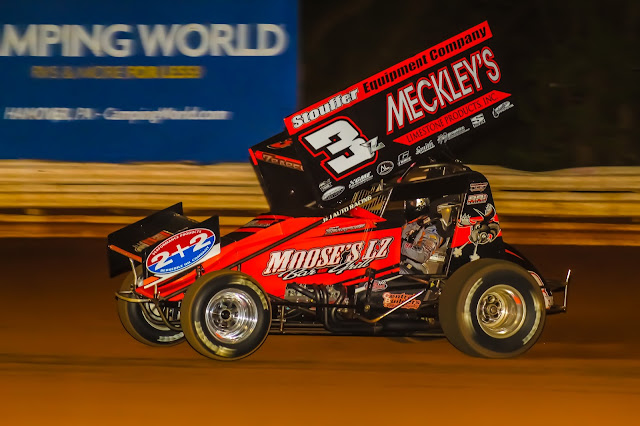 JONESTOWN, Pa. (May 14, 2018) –  With the intent to beat the World of Outlaws Craftsman Sprint Car Series on home dirt for the second time in his young career, the “Jonestown Jet” Brock Zearfoss set his aim ahead to a trio of programs in Central Pennsylvania, anxious to join The Greatest Show On Dirt during visits to Lincoln Speedway on Wednesday, May 16, and Williams Grove Speedway on Friday and Saturday, May 18-19.

Zearfoss, a two-time winner in Central Pennsylvania thus far in 2018, beat the World of Outlaws on home dirt at Williams Grove Speedway in 2017, piloting the Aaron Long-owned/LA Competition/No. 58 sprinter to a Summer Nationals preliminary win worth $8,000 on Friday, July 21. Starting fourth on the feature grid, Zearfoss led the last nine circuits to claim the biggest victory of his career, ultimately holding back David Gravel and Donny Schatz at the final checkers.

“That’s something I’ll never forget,” Zearfoss said when discussing his first Outlaw victory. “I don’t think i’ll ever forget that feeling, honestly. I’ve been working to get number two since then. I think we have a great opportunity to get it done this weekend. We had some things go wrong mechanically during the Outlaw Tune-up at Williams Grove, but we’ll be ready to go for Wednesday.”

Unfortunately for Zearfoss, his Outlaw Tune-up attempt at Williams Grove Speedway on Friday, May 11, was cursed with mechanical misfortune. Power steering complications during hot laps, rear end trouble during the evening’s dash, and crank trigger issues during the main event kept the “Jonestown Jet” from dialing-in his familiar No. 3Z at maximum potential. Zearfoss was battling for the fifth position when the crank trigger issues occurred.

“You have to shake those nights off and move forward,” Zearfoss explained. “I’d rather have those issues happen on nights like that rather than during the Outlaw events. Having multiple problems like that gave a reason to look over the car and make sure nothing else was wrong. If anything, it brought us some good. We’ll be better prepared for Wednesday.”