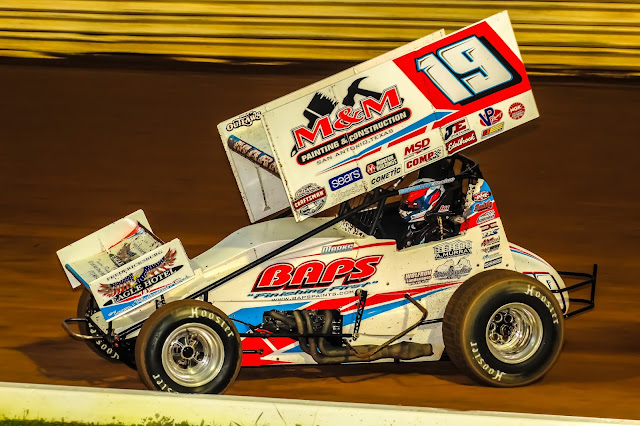 MYERSTOWN, Pa. (June 12, 2018) – Capping off an impressive stretch of World of Outlaws Craftsman Sprint Car Series competition that included one victory and three consecutive top-five finishes, the “Myerstown Missile” Brent Marks made the most of his recent visit to Fairbury (Ill.) American Legion Speedway on Tuesday evening, June 5, not only securing his third top-five finish in three starts, but doing so from the outside of row seven.

Marks, driver of the Brent Marks Racing/M&M Painting & Construction/BAPS Auto Paint & Supply/Eagle Hotel/No. 19 sprint car, started 14th and drove to fifth at Fairbury, actually battling as high as fourth in the running order during certain segments of the main event. The second-year Outlaw traveler secured his place in the main event by finishing fifth during his respective heat race.

“It ended up being a really good night for us. What a cool facility. It was a really small track, but we seemed to get comfortable pretty quick,” Marks said of Fairbury. “Things didn’t go as well as we would have liked them to at Jackson Motorplex, but we’ll take the good with the bad and move forward. The season is still young. We have plenty of opportunities ahead of us.”

Unfortunately, Marks was unable to continue his top-five streak during competition at Jackson Motorplex on June 7-9, highlighting his three-day turned two-day campaign at the 40th Annual Jackson Nationals with a 15th place finish during the $40,000-to-win finale on Saturday evening, June 9.

Brent Marks will continue his 2018 World of Outlaws campaign with a two-race march through North Dakota, set to visit River Cities Speedway in Grand Forks on Friday, June 15, followed by a stop at Nodak Speedway in Minot on Sunday, June 17. Marks will enter the weekend 11th in the World Of Outlaws championship standings, just 30 markers outside of the top-ten.

SOCIAL MEDIA:
Fans can keep up with Brent Marks during his entire campaign right here at www.fullyinjected.com. Be sure to also visit the official online home of Brent Marks Racing at www.brentmarksracing.com.