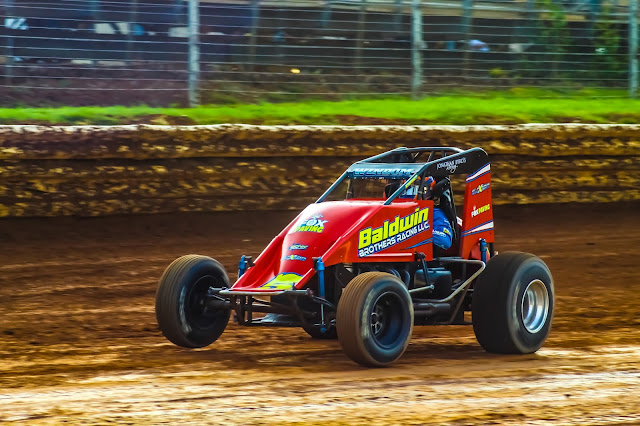 PORT ROYAL, Pa. – Chris Windom of Canton, Illinois, scored the USAC Eastern Storm victory on Saturday night at Port Royal Speedway for the second year in a row, taking the $6,000 victory after exchanging the lead four times with Brady Bacon.

In the regular 25-lap 410 sprint car main, Greg Hodnett wired the field for the $4,000 payday in what was a crash-marred event.

The 30-lap USAC feature saw Windom and Bacon share the front row for the start with Bacon taking the lead over Windom during the early going before the red flag unfurled on just the third lap for a vicious front stretch crash by Trevor Kobylarz.

Kobylarz made contact with the outside wall and flipped in front of the grandstand but escaped injury.

Four more laps were recorded before a yellow flag bunched the field with Bacon still in control over Windom but it wasn’t until lap 12 that the front duo began battling fiercely for control.

Windom blasted under Bacon in the first turn on the 12th lap to slide up and snag the lead but just that quick Bacon dropped off of the cushion and rallied to Windom’s inside racing down the backstretch to regain control by bolting inside in the third turn and driving up to get the lead back.

The next time into turn one, Windom again pulled the same move for control and likewise Bacon again did the same thing as he had done the lap prior and he again dropped off of the cushion, drove a lane lower under Windom on the backstretch and blasted back into control entering the third turn.

After that Bacon stayed just far enough out of Windom’s reach to begin looking like he had a shot at the win only to suddenly slow with 13 laps to go, relinquishing control to Windom just as Jarrett Andretti hit the wall in the second turn.

Both Andretti and Bacon made repairs and tagged to the rear of the field for the restart.

Sixth starter Kevin Thomas Jr., the night’s fast timer in qualifications, tussled with Windom on the restart but gradually the smooth running Windom started to get away on the cushion.

Windom rode the cushion to the victory in the end by .698 seconds over Thomas with Tyler Courtney ending up third. 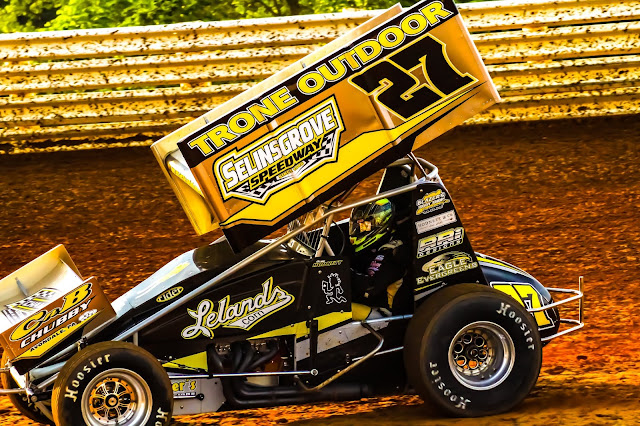 Greg Hodnett and AJ Flick started on the front row of the regular 410 sprint car main and Hodnett blasted into control over Flick when the green unfurled.

Hodnett hit traffic with Flick chasing him on the eighth tour and had built up a 3.352 second advantage by lap 10 when Kody Lehman lost power on his machine and rolled to a stop.

Flick got underneath Hodnett on the restart and for just a moment held the lead but Hodnett rode his momentum to regain control while Brock Zearfoss capitalized on on Flick’s move to snare second.

And then the first red flag of the race appeared with 10 laps to go when Trenton Sheaffer slammed into the first turn wall and recoiled back down onto the track.

Sheaffer escaped injury and Flick changed a tire under the red.

When action restarted, the machines of Zearfoss, Mike Wagner and Rick Lafferty dueled for second for several laps before Lafferty finally gained the position over Wagner with six laps to go.

Wagner and Zearfoss then continued to battle for third with contact between the pair ending up with Wagner spinning with two laps to go.

The restart saw a red flag period return when TJ Stutts blasted inside of Steve Buckwalter in the third turn only to make contact while trying to make the pass and flipping wildly into the fourth corner.

A lengthy red flag period followed while Stutts was extricated from the car before being transported to an area hospital to be checked out.

Hodnett drove away on the restart to record his second win of the year at the oval and the 52nd of his career in the facility.

Heats went to Flick and Hodnett.