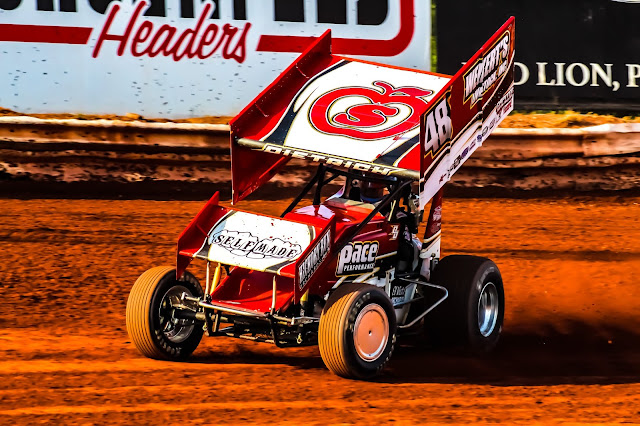 Dietrich’s podium run was amongst some good company, finishing just behind driving phenom Kyle Larson and rising NASCAR star Christopher Bell out of the 52 entries on hand for action.

In addition to his third place performance at Sharon, Dietrich finished ninth at Eldora Speedway during night two of Ohio Sprint Speedweek on Saturday, June 16, followed by a charge from 15th to finish seventh at Wayne County Speedway on Monday, June 18.

Unfortunately for the Gary Kauffman Racing entry, a mishap during B-main action at Atomic Speedway cut off Dietrich’s momentum supply; getting upside-down and failing to transfer into the evening’s main event. As the result, instead of sticking around to finish Ohio Sprint Speedweek, Dietrich returned home to Central Pennsylvania to enter events at Williams Grove Speedway and Lincoln Speedway on Friday and Saturday, June 22 & 23. Becoming an ongoing trend, Mother Nature stepped-in and interfered with both programs.

“It’s fun to have the opportunity to visit Ohio and race at tracks we don’t normally get to race at,” Danny Dietrich said, driver of the Gary Kauffman Racing/Weikert’s Livestock/Sandoe’s Fruit Market/Pace Performance/Gsell’s Whitetails/Hickory Run Orchards/Drop Of Ink Tattoo/Sweeney Cars/Self Made/No. 48 sprint car. “The fans in Ohio are fantastic and the little ovals are a lot of fun. Hopefully we can transfer some of our momentum built from Ohio Speedweek into PA Speedweek.”

Danny Dietrich is the 2016 Pennsylvania Sprint Speedweek champion. “Double-D” will enter the 2018 edition with five wins on the season.